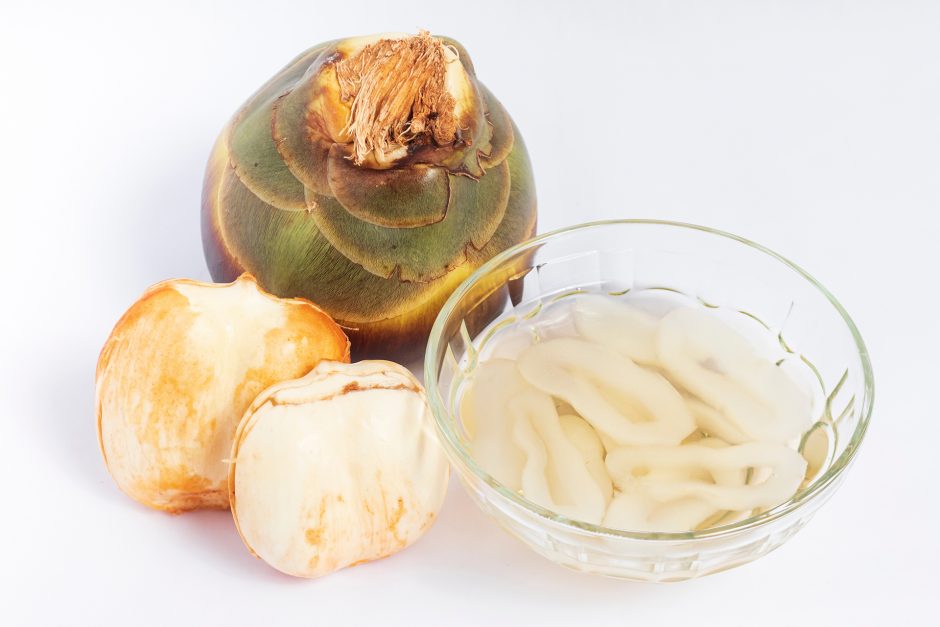 Dessert soups are a key feature of various Asian cuisines, such as the fruity Thai bananas in coconut milk, Malaysian Nyonya sweet broth, and Indonesian Wedang Ronde. But when it comes to maximizing the flavours and health benefits of traditional herbs and fruits, the Chinese has truly made the dessert soup into unique culinary art.

And the sea coconut is one of the ‘best-kept secret’ ingredients – a smooth, tender jelly-like fruit that adds a unique sweet flavour and texture for tastier enjoyment.

Actually, it’s not a coconut at all, but the fruit of the Palmyra palm. A tree plant native to India and Southeast Asia, with large fan-shaped leaves and tall, long trunks. Similar to the coconut, the Palmyra have many uses from leaves to bark, but its fruit is very different. Also protected by a hard husk, its size is slightly smaller, and mostly black in colour. The top of the husk is cut to reveal the seed sockets, then the seeds’ yellow-brown skin is removed for the translucent pale-white edible flesh – naturally sweet with a coconut-like flavour and smooth jelly texture.

No one really knows why it’s called ‘sea coconut’. But Chinese folk tales say that a cluster of Palmyra fruits washed upon a Southern Chinese shore long ago, shaped like coconuts yet not of the local trees. And, after tasting the sweet jelly fruit, they were convinced it was a coconut variant that grew at the bottom of the sea and named it so. It would be centuries later that the Palmyra was brought to China and cultivated there, but by then, the name had stuck.

But get this: there’s also an actual sea coconut known as Coco De Mer. An endangered species native to the Seychelle Islands, and not for consumption.

As for the Asian sea coconut, the largest producer today is Thailand, which exports the whole-husk fruits and canned jelly seeds to the world.

Asian sea coconut is packed with phosphorus, calcium and vitamin C. It’s considered a ‘cooling’ food in traditional Chinese medicine, best savoured during hot weather; and known for treating skin inflammations, as well as a remedy for stomach aches and nausea. The natural fruity sweetness soothes rather than excites, and the tender but firm texture allows it to stay in shape for the double-boil or simmering; which releases the nutrient-rich juice into your dessert soup mix.

You can also enjoy it straight from the can, or add it raw in your Cendol, Kakigori shaved ice, and Korean bingsu.