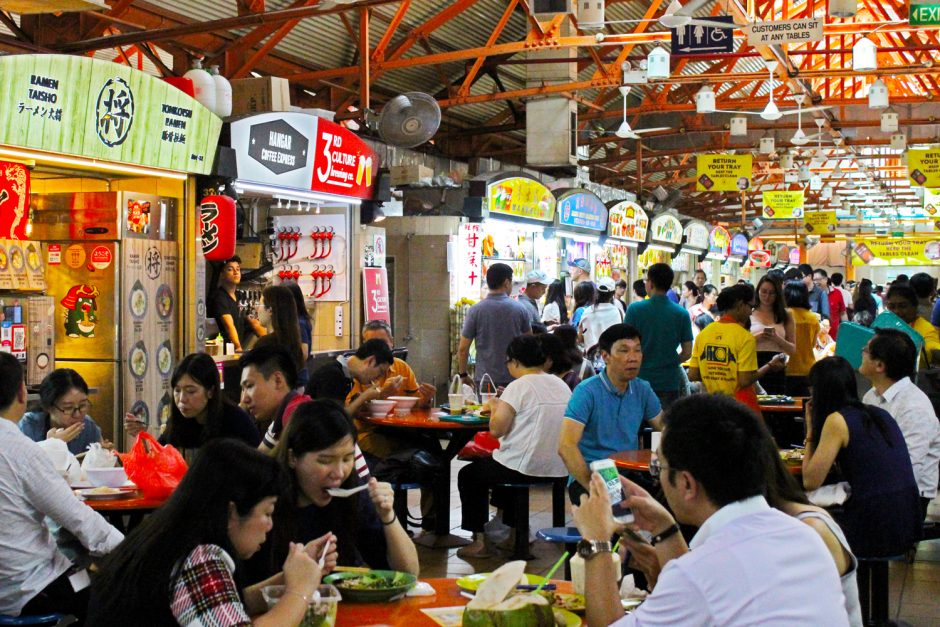 Singapore is famous for a few reasons, and top of the list are shopping and food. So clearly the best thing to do in Singapore is to shop for food!

Singapore is home to some of the world’s best street food all housed inside massive hawker centres—just like a massive retail shopping mall, except filled with food stalls instead!

They were built as a way to regulate street food sellers. By moving all the hawkers into central locations, food hygiene, food quality and seller accountability could be monitored.

With this in mind, it’s no surprise that these hawker centres are government-owned and regulated.

Hawker halls—with their hundreds of food stalls and competing sights and smells—can be a little overwhelming for a first time visitor. The key is to head to each venue with a game plan: I want to try these foods, from these stalls, in this order.

That way, you can make sure you try the foods you’re really jonesing for without getting too distracted. But with so much variety, where does the discerning foodie go, and what do they eat when they get there?

Once again, we’ve got you covered!

Here’s a list of some of Singapore’s best hawker halls and the food they’re famous for!

The Maxwell Food Centre first opened its doors way back in 1928, and was most recently renovated in 2001. Expect great street food with a Cantonese bent and big crowds.

The jewel in the food crown here is Tian Tian Hainanese Chicken Rice, one of the world’s cheapest Michelin-starred eateries. As the name suggests, their Hainanese chicken rice is the draw card, and may be the most popular hawker food in Singpore. Long queues snake their way through the hall all culminating at Tian Tian’s register, so make sure you get there early. As a general tip, try to avoid the lunch rush between 12 and 2pm, as all the poor working stiffs are out trying to squeeze some food in.

Satay by the Bay

One of the newer centres on the scene, Satay by the Bay is really more of a giant food court than a hawker centre. Located in the Gardens by the Bay, you can expect some excellent seafood and a whole bunch of tourists.

You will get some fantastic views of the water—and the Marina Bay Sands—while you eat though, assuming you can find a table.

The satay on offer is good enough to have the complex named after it, but there’s much more than just satay on offer. In fact, a wide variety of Singapore street food can be found here, with favourites like char kway teow, carrot cake, laksa, hokkien mee, BBQ chicken wings and nasi briyani all available. There’s also plenty of seafood to suit the surroundings.

This hawker hall was featured in Crazy Rich Asians, so you know it’s good!

Home to another stall that made Michelin’s Bib Gourmand list—Alliance Seafood—this centre has a wider range of cuisine types.

For the more adventurous eaters out there, you can’t go past the sambal stingray from Alliance Seafood. Similar in texture to flake, the sting ray is grilled over charcoal and served with homemade sambal, pickles and lime, and it’s spicy and delicious.

Alliance also do some of the best—and cheapest—chilli crab in Singapore, along with classic dishes like fried squid and school prawns.

Definitely the destination if you a) love seafood, and b) love views of the water. East Lagoon Food Village is full of only the freshest fruits of the sea, and you can get them cooked in a variety of ways.

Octopus, prawns, red fish and—of course—crab are all on offer, and you can’t go wrong with any of them.

If you’re up for it—and you should be if you love food—then the curried fish head from Eastern Red Seafood can’t be missed.

Another centre with Bib Gourmand-quality chicken and rice, this time from Tiong Bahru Hainanese Boneless Chicken Rice. Get on it.

Tiong Bahru Food Centre opened up back in 1951, and has been feeding Singaporeans ever since.

Since its redevelopment in 2006, the food centre now sits above a wet market—meaning they sell fresh fish and meat—and for this reason alone is a true assault on the senses.

Singaporeans like to eat breakfast out as much as Australians, and one of their favourite places to do it is the Tiong Bahru Food Centre. So get there early and dig into some chwee kueh and soy milk, and even some deep fried shark nuggets. Yes, you read that right.