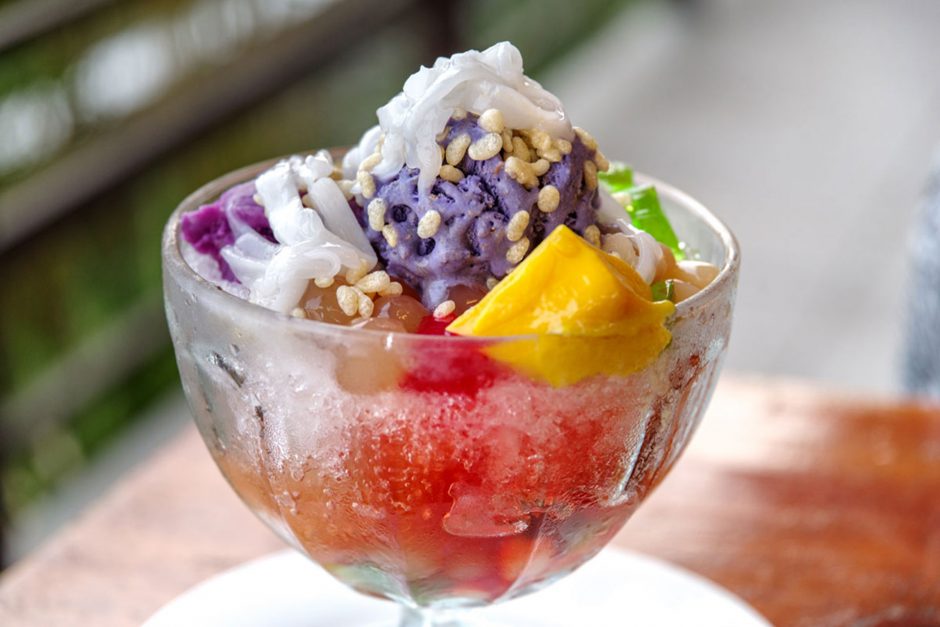 Hello, Summer! Time for the beach, barbecues, and just chilling with your favourite desserts. But why settle for the usual? Here are 10 special cool treats for you to discover and enjoy. 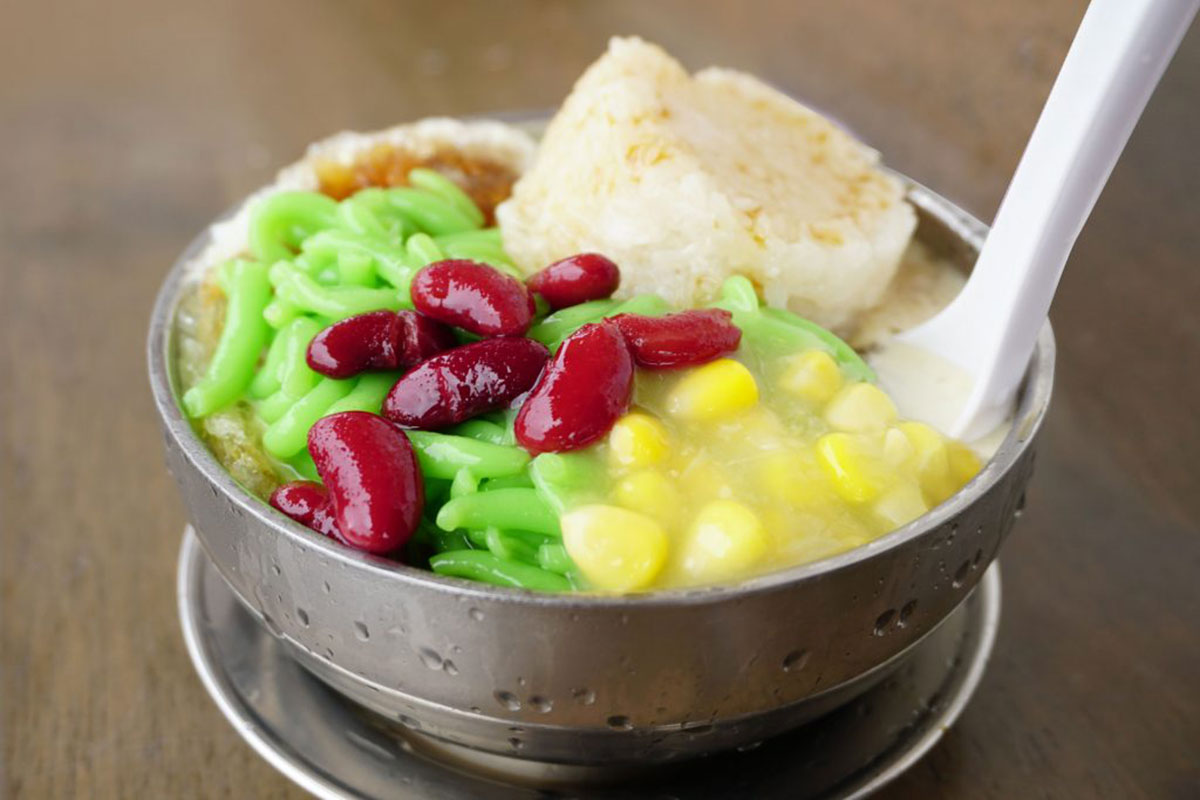 Southeast Asia is hot all year round, which cultivates an extra special love for cooling desserts. Cendol is one such: green rice flour jelly, coconut milk and palm sugar syrup with a nice bowl of shaved ice. Believed to have originated in Java, Indonesia, the oldest record of it is a sweet beverage called Dawet in the 12th century Kresnayana manuscript. Ancient villagers there made jelly from rice flour, coloured with cooked Pandan leaf juice and served with coconut milk. The recipe spread to Old Melaka. The local Malays described the noodle-like jelly as ‘jendol’, meaning ‘bump’, ‘bulge’ or ‘swollen’. A few centuries later, colonial Brits brought ice, and the sweet, cool Cendol was born; eventually savoured all over the region. 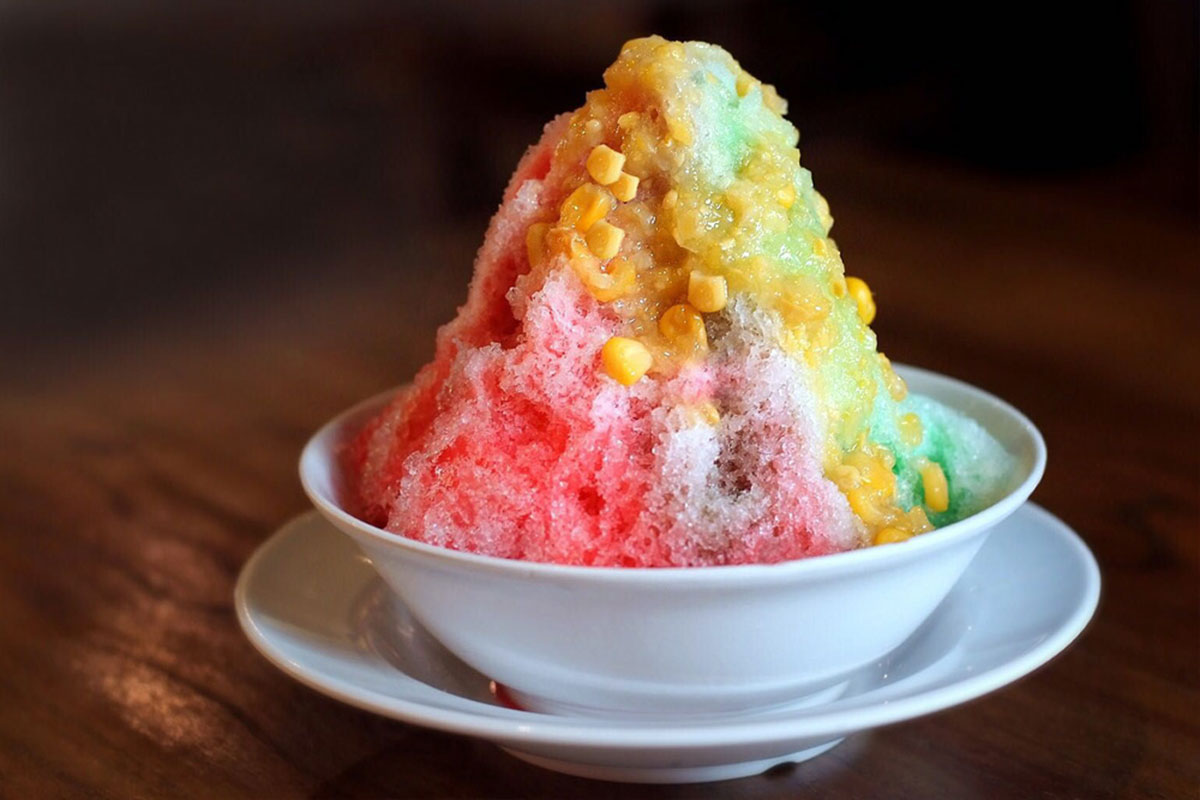 Literally means ‘iced beans” in Malay, this sweet, chilly dessert is a beloved darling in Malaysia and Singapore. Traditionally made with just shaved ice and red beans, Ais Kacang today is so much more, with vendors adding their unique mix of ingredients, such as ice cream, condensed milk, rose syrup, grass jelly, peanuts, agar-agar, kidney beans, nata de coco, etc. No Ais Kacang is quite the same, and every serving is a surprise. 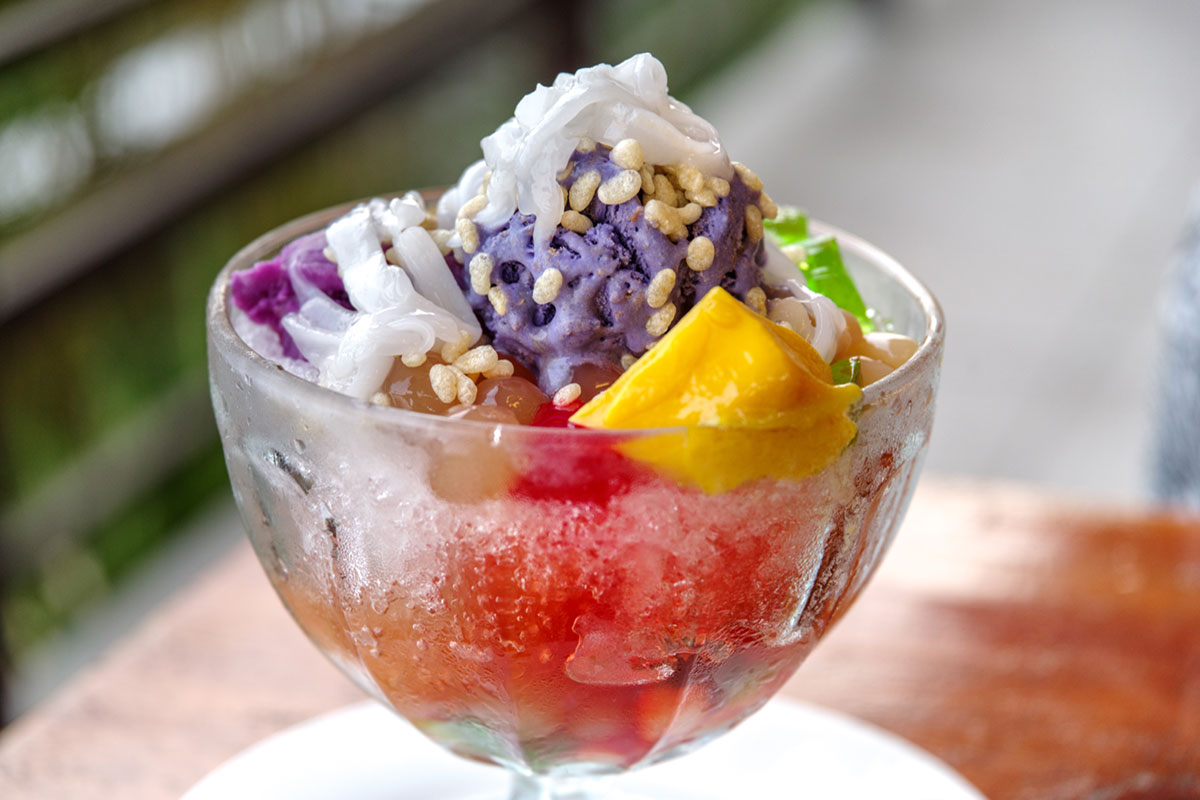 A Filipino delight believed to be reinvented from the Japanese Kakigori, the Halo-Halo has many ingredients: crushed ice, yam, sago, seaweed gelatin, pinipig rice, fruit slices, flan and evaporated milk, topped with a scoop of ice cream. Similar to the Ais Kacang, an earlier version was just red beans or mung beans with ice, sugar and milk called Mongo-ya. But later developed to include more native ingredients, which gave the name Halo-Halo, meaning ‘mix-mix’ in Tagalog. Though locally served in a bowl, Halo-Halo has spread as far as the U.S. and can be found as an iced beverage in tall cups. The late Anthony Bourdain described it as ‘oddly beautiful’, befitting of this marvellous treat. 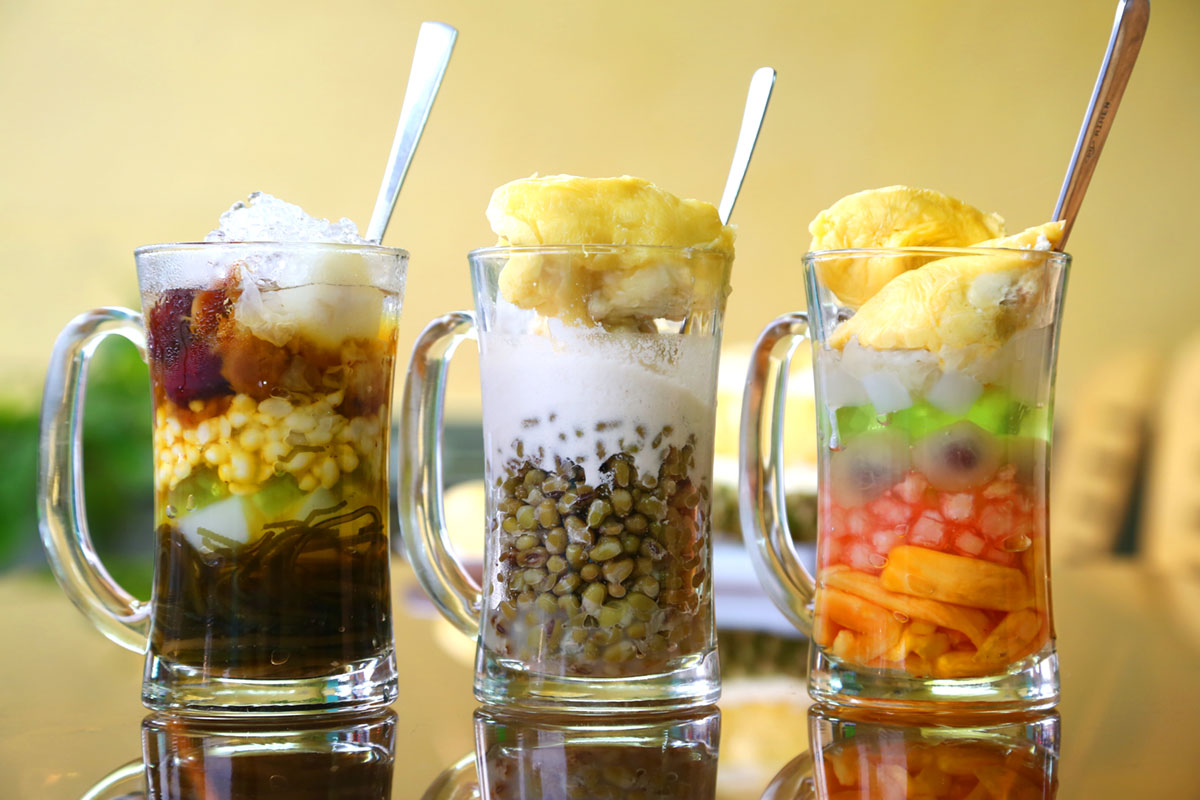 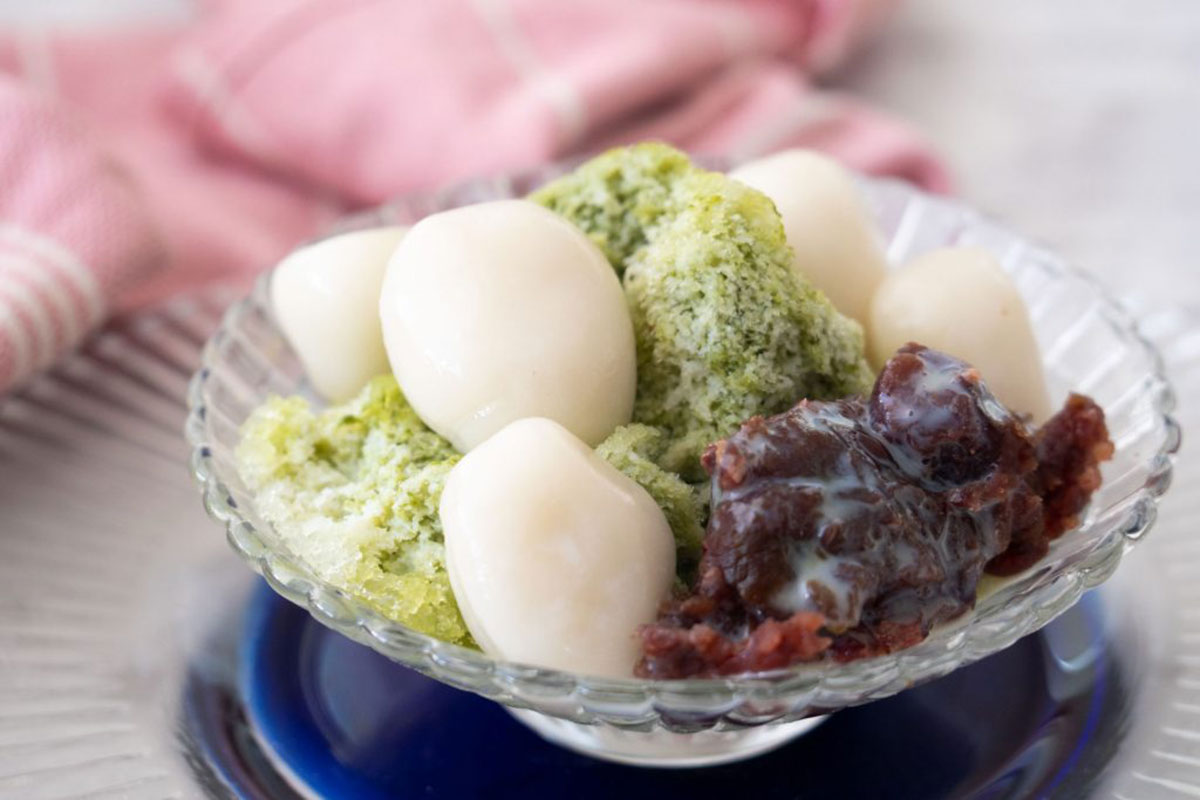 This Japanese treat dates all the way back to the 11th Century, when ice-blocks were made during winter and spring, kept till the summer, then shaved and topped with sweet syrup, as an aristocratic dessert. It wasn’t until refrigeration came to Japan in the 19th Century that Kakigori became a public favourite, with street vendors everywhere shaving ice-blocks with hand-cranked machines. The smooth and fluffy snow-like texture makes it different from other ice desserts. Modern variants include fruity flavours like strawberry, cherry, lemon, grape and melon. Super popular at summer festivals, convenience stores, coffee shops and restaurants. 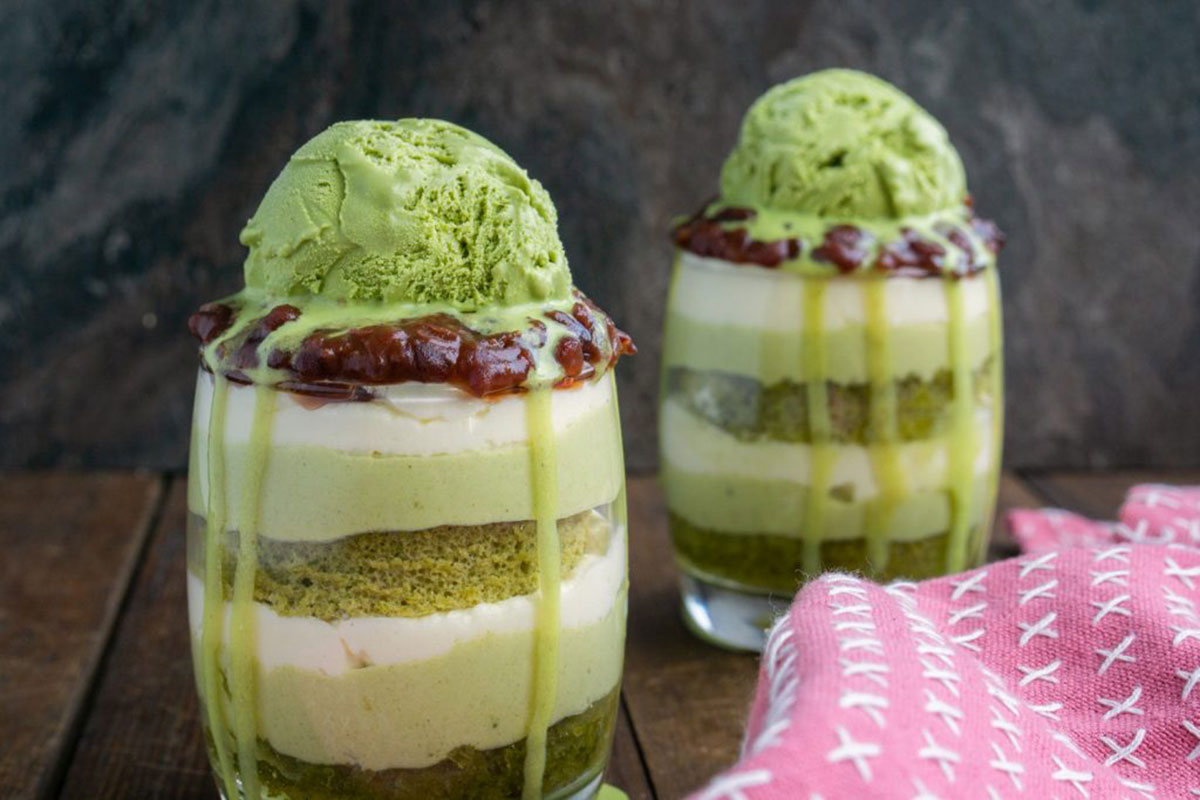 There are two types of traditional parfait: French, a cold dessert of whipped cream, eggs and fruit. American, ice-cream sundae with granola, fruits and whipped cream. But the Japanese style takes it to the next level, making their own modern King of Desserts, with a vast variety of ingredients such as mochi rice cakes, glazed fruits, red bean paste, green tea jelly and a sprinkle of cornflakes. Though a cold treat like Kakigori, parfait is served year-round and is distinguished by the stacks of tasty goodies in tall dessert cups. The versions are countless, with chefs and restaurants creating spectacular recipes all over Japan. 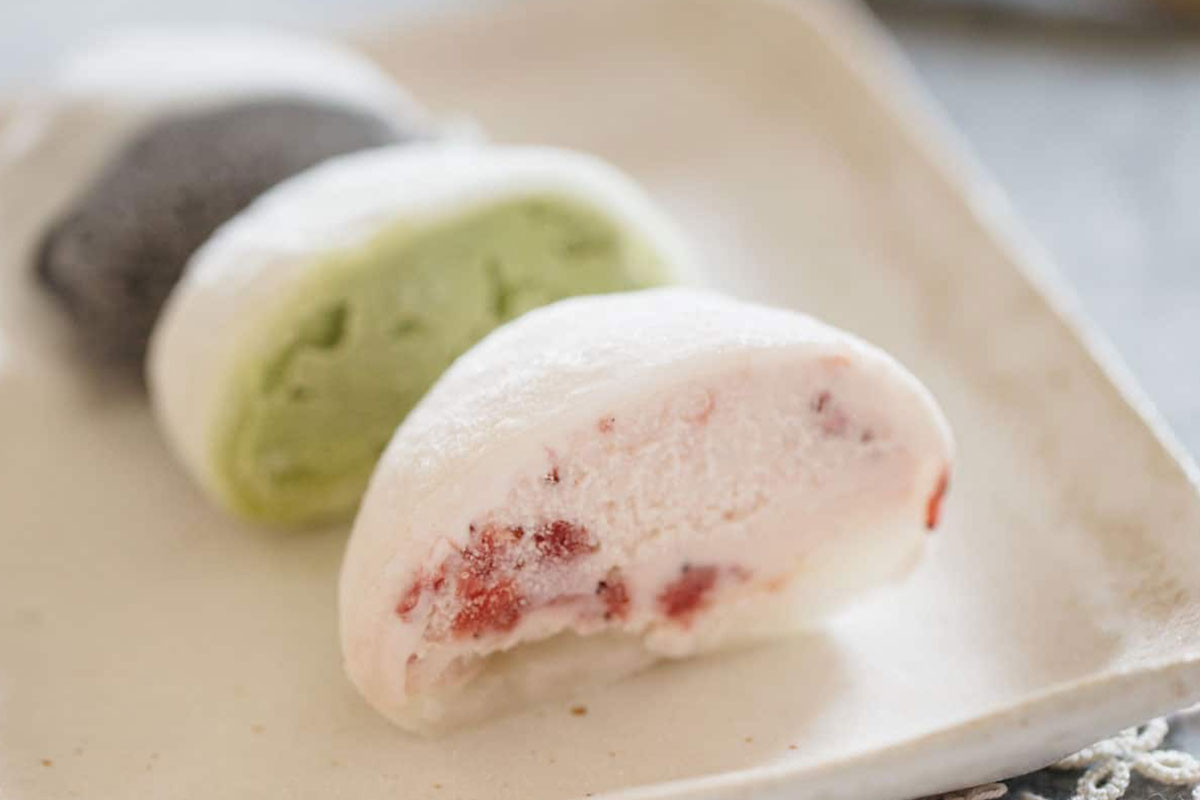 Invented by Japanese-American businesswoman Frances Hashimoto in 1993, this adorable delight is sticky rice dumpling with ice-cream filling. Chewy outside, sweet and cool inside. Want to make it? Just follow this video! 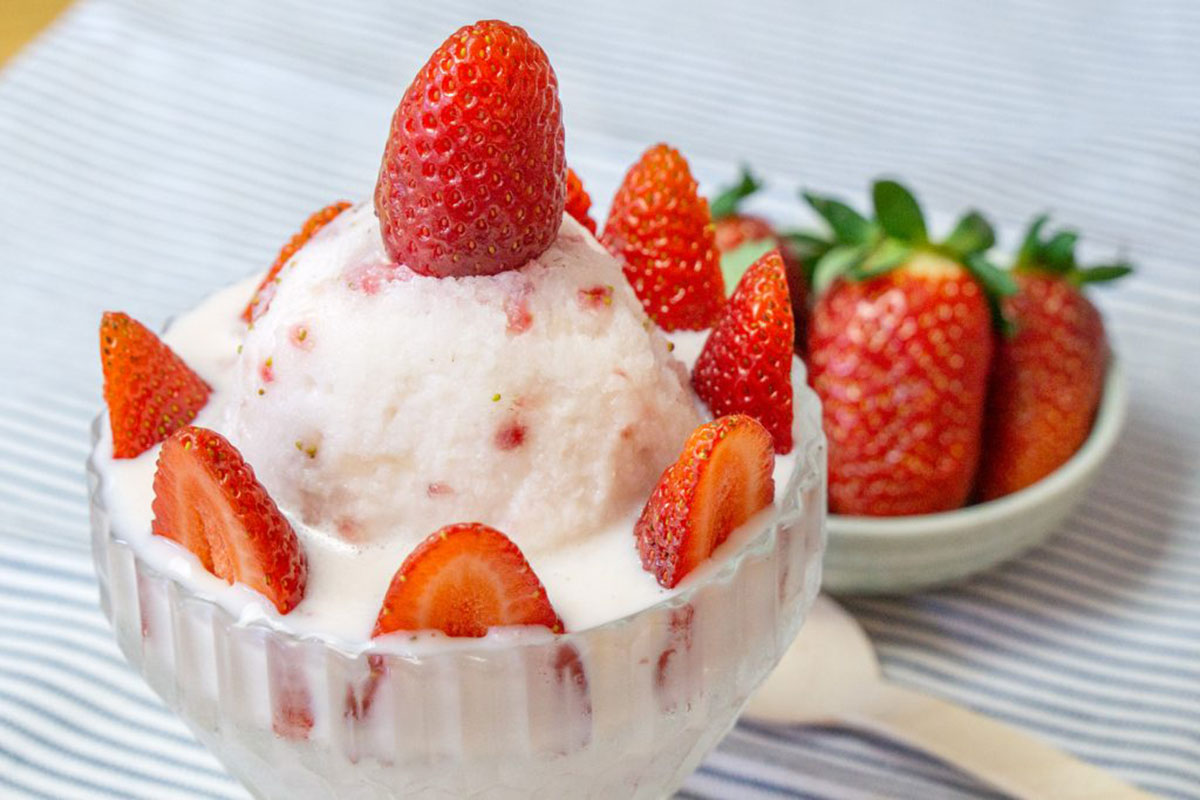 Korean shaved ice topped with fruits or red bean paste, sweetened with syrup or condensed milk. The earliest form of Bingsu was created during the Joseon Dynasty, the golden age from 1392-1910 that ushered in the modern era. Like most shaved ice treats, Bingsu today also has a great selection of different flavours and ingredients; including persimmon, yogurt, ice-cream, milk tea, black sesame, mixed berries, soybean powder, green tea and even cheese. 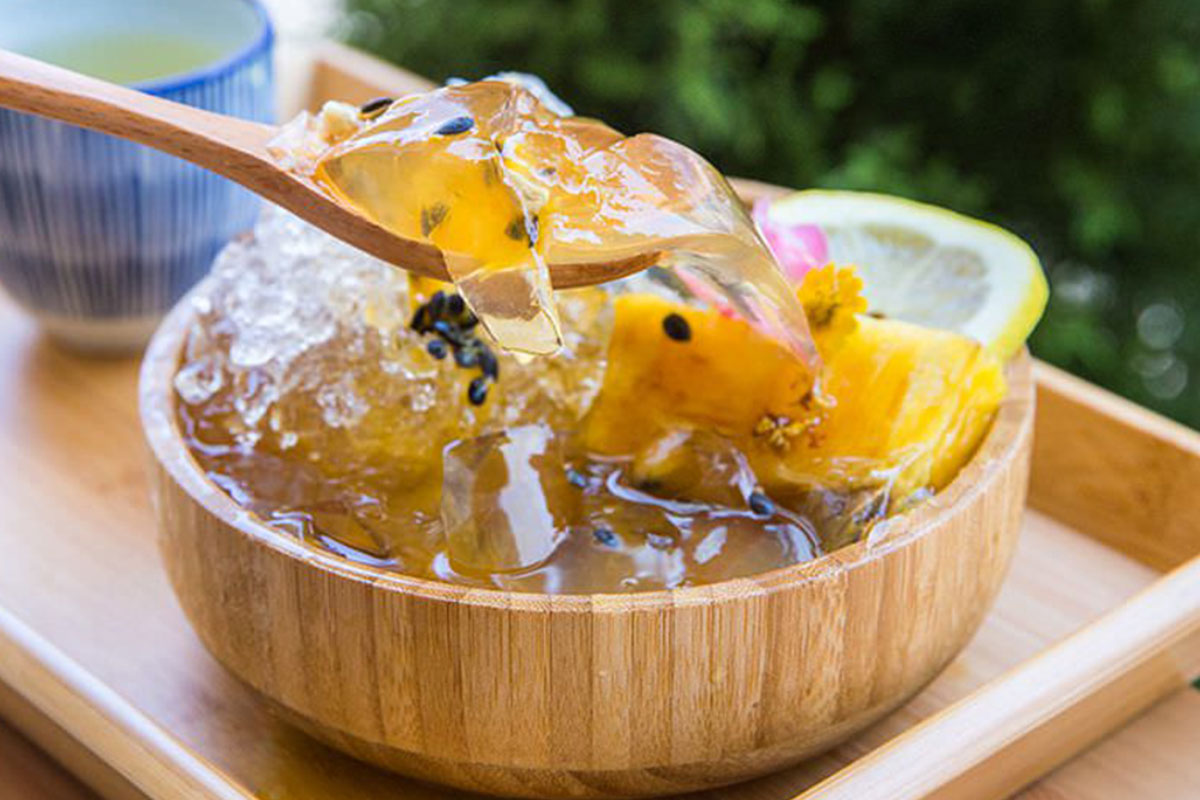 Jelly made from seeds of Awkeotsang fig, this cool, sweet-sour dessert is a traditional Taiwanese special, served with ice and sliced lime. According to oral history, a tea businessman in the 1800s found a naturally-formed jelly while drinking from a creek. He looked up and noticed fruits on hanging vines, with seeds that exuded a sticky gel when rubbed. He brought the fruits home, tried it with honeyed lemon juice. The jellied beverage was delicious! So he gave the task of selling it to his young daughter Aiyu. The dessert became highly popular and thus was named after her. Check out how to make this wonderful treat here. 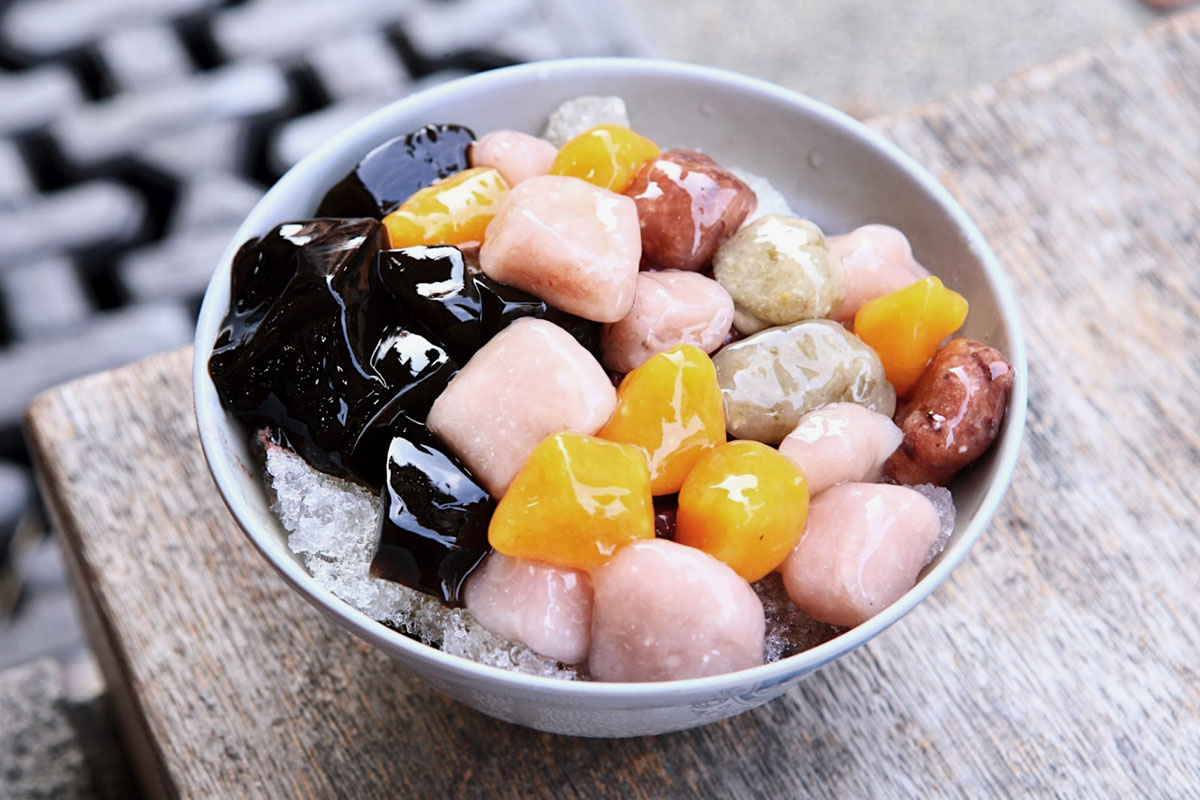 Another Taiwanese delight made with steamed mashed taro, water, sugar and sweet potato, served in cold syrup, shaved ice or other sweet soups like walnut soya milk or red bean soup. Soft, springy, and a fun yummy treat. Try it with this simple video recipe!