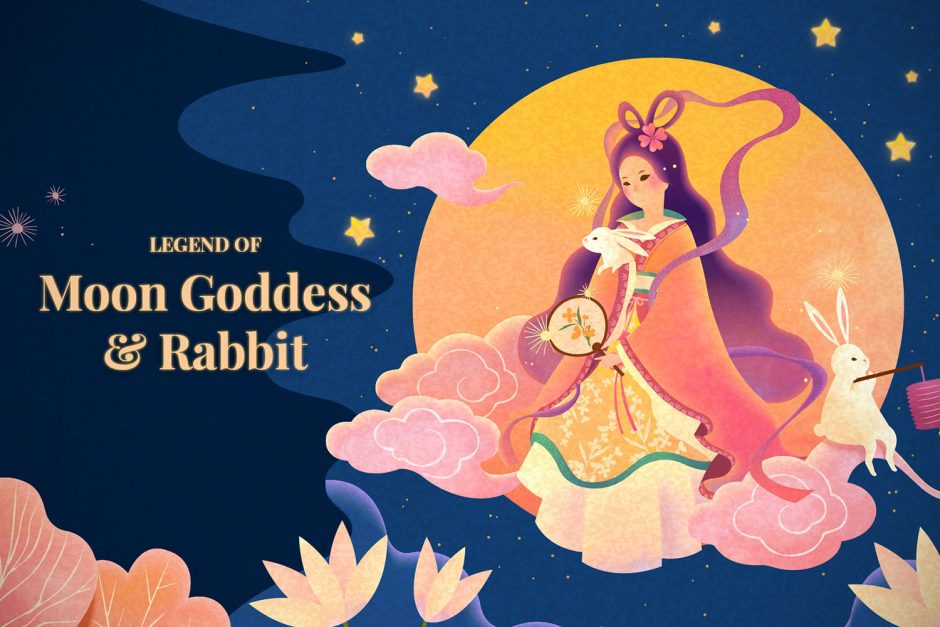 Each year, on the fifteenth day of the eighth month in the Lunar Calendar, East Asians around the world celebrate the Mid-Autumn Festival. Since ancient times, bright lanterns adorn the streets and homes, while families gather under a full moon and feast on mooncakes, pomelo, taro, duck and water chestnuts.

Historians say the festival began as a celebration of the autumn harvest, which is mostly true for Korea, Vietnam and Japan. But China tells a unique myth of romance and immortality.

There used to be 10 Suns

The tale comes from the ancient Zhou Dynasty’s “Shan Hai Jing” or “Classics of Mountains and Seas”. The Celestial Empress gave birth to ten literal suns that scorched the earth and caused a massive drought, while monsters emerged to terrorise the land.

So the Celestial Emperor summoned the Divine Archer Yi (sometimes called Da Yi or Hou Yi in retellings) to deal with the problem. Yi shot down nine suns, leaving one, and killed all the monsters, allowing life on earth to begin anew. But the boss Emperor wasn’t all pleased, for the suns were still his offspring. So, Yi and his wife Chang Er were banished to the mortal earth.

Chang Er couldn’t get use to mortal life and was always depressed and moody of their situation. So, Yi went on a quest to seek out the Queen Mother of the West. A Taoist deity of prosperity, longevity and eternal bliss. Seeing his determination and unconditional love for Chang Er, the Queen Mother gave Yi a vial of an immortal elixir made from an extra-potent peach that grew on her mountain every 6000 years.

Problem is, the elixir is only enough for one person. But Yi was happy, thinking that he’d share it with Chang Er and enjoy long life on earth together.

Yi went home and showed Chang Er the elixir. But instead of sharing it, Chang Er wanted full immortality for herself and drank the whole thing.

She floated back up to the heavens, but the Celestial Emperor denied her entry to his court and banished her to the moon instead.

The moon in Chinese mythology since the Shang Dynasty before this tale is home to Yu Tu, the moon hare, who makes special herbs for Celestial court members and sometimes smuggled them to high-ranked rich mortals. Chang Er arrived on the moon and regretted ditching her husband. So, she spends eternity with Yu Tu, with hopes to one day make an elixir for her husband Yi.

Because much of the “Shang Hai Jing” is interpreted from the ancient text, and the tale of Chang Er has been told through generations of oral history, there are other variations to the story.

One says two elixirs could’ve given semi-immortality for the couple, but Chang Er was selfish and drank both. Again, eye-roll for the greedy wife trope.

Another version says there was one vial, but neither Yi nor Chang Er wanted to abandon the other. So, Yi mixed the elixir into her drink when she wasn’t looking, and fulfilled her wish for immortality instead.

But the most popular version that Mid-Autumn Festival celebrates: Chang Er was deeply moved by the great lengths her husband had gone to get her the elixir, and decided it was no use to become immortal on her own. They agreed to keep the elixir for absolute emergencies and to only use it a little at a time as a medicine. Chang Er grew out of her depression and lived happily with Yi.

Some years later, Yi took in an apprentice named Feng Meng, who heard of the elixir and grew greedy. So one day, Feng Meng went to their home while Yi was out hunting to steal it. He attacked and threatened Chang Er, but she refused to give in and drank the elixir to save herself.

Chang Er floated to the heavens. But instead of returning to the Celestial court, she went to the moon so she could stay close and watch over her husband on earth.

Yi looked upon the moon every night for a glimpse of his wife. And each year, he made a special round-shaped cake, laid out an altar below the full autumn moon to commemorate her sacrifice and eternal love.

Korea, Vietnam and Thailand each have a Moon Fest tale. While Malaysia and Singapore give a wholly different take of this original tale of Hou Yi and Chang Er.

Read on to find out more.