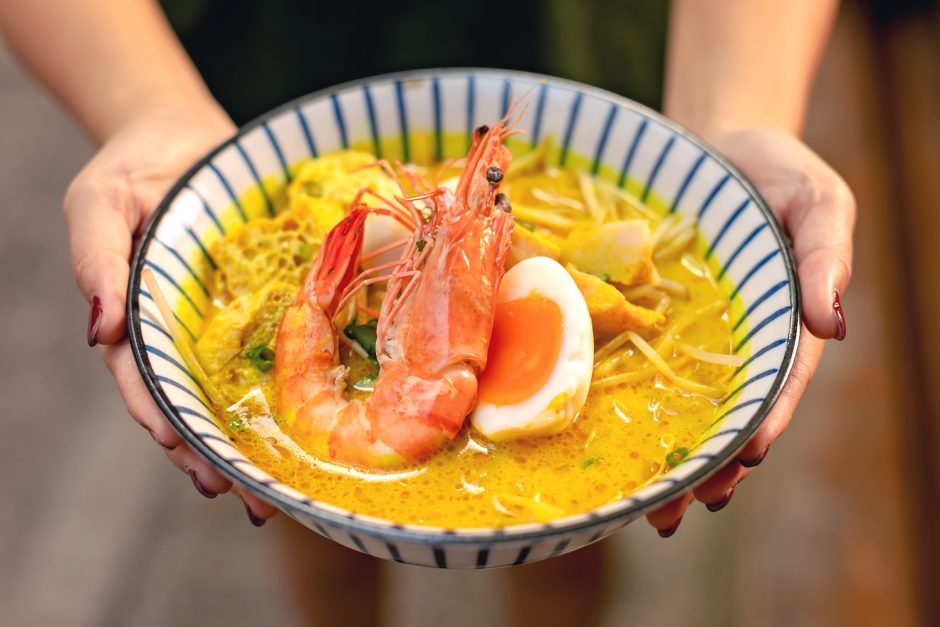 Laksa is a popular Peranakan spicy noodle soup. Peranakan culture is based in Southeast Asia and is a mash-up of Chinese, Malay and Indonesian influences. So it’s no surprise that laksa is a fusion of Chinese noodles and Southeast Asian curries, and range from the mild “Chinese” type curries to the full-blown spicy variety.

The origin of the name “laksa” is unclear. One theory traces it back to Hindi/Persian word “lakhshah”, a name for the type of vermicelli used in the soup. “Lakhsah” in turn may be derived from the Sanskrit lakshas meaning “one hundred thousand”, referencing the noodle cake when dry. It has also been suggested that “laksa” may derive from the Cantonese “lɐ̀t sá”—literally “spicy sand”—alluding to the ground dried prawns used in the soup, which gives laksa a sandy or gritty texture. Another theory—again related to the gritty texture of the broth—is that laksa is derived from the hokkien word for “dirty”—”lup sup”. Hokkien is a type of Chinese originating in Fujian and spread by Chinese immigrants to Taiwan, Malaysia and Indonesia—the same immigrants responsible for helping develop Peranakan culture.

There are two main types of laksa:

Curry laksa is generally what we think of when we hear people talk about laksa. Also known as curry mee, it’s made from a coconut milk and curry paste base and is creamy, intense and often super fiery thanks to lashings of chilli on top. Curry laksa isn’t a dish of subtlety, often bulked up with fish balls, tofu puffs, noodles and prawns or chicken (sometimes both!). Traditionally made with fresh, flat, thin rice noodles, you’ll sometimes see it with mee (yellow wheat noodles) instead, hence why it is referred to as curry mee in Penang.

Assam laksa on the other hand contains no coconut milk. Instead, the lighter broth is made from fish (usually trevally, snapper or mullet), tamarind and torch ginger flower. Torch ginger flower is a spectacular edible bloom common through Southeast Asia and—as the name suggests—has a spicy aromatic flavour. Spring onions, shrimp paste and fragrant roots are blended to form a rempah (spice paste), which adds punchy flavour to the broth when mixed through. The soup is finished with a garnish of pineapple, cucumber and mint and helps cut through the broth. Whilst originating in Penang, this laksa is particularly popular in the capital Kuala Lumpur, eaten—no doubt—as the antidote to heat and humidity.

And there you go! Hopefully, you now know a bit more about the interesting history of one of the most beloved noodle soup dishes from Southeast Asia. Now, check out our collection of laksa recipes you can cook up at home.