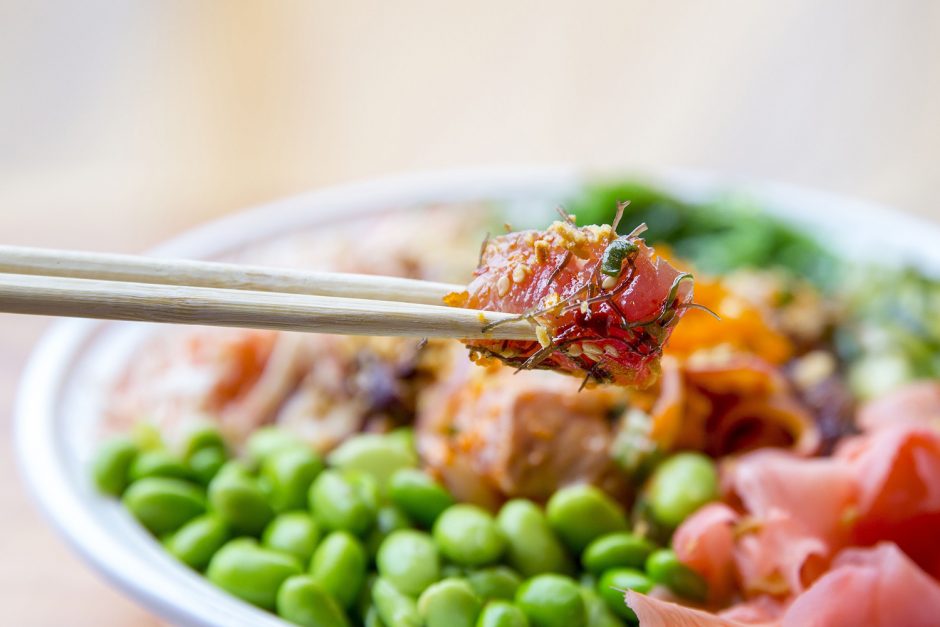 Poke – pronounced poh-kay, not poh-kee – has taken over the office lunch space. A delicious combination of healthy ingredients, Poke is a quick and nutritious way to recharge for the afternoon. But if Poke originated from Hawaii, why do they use so many Asian flavours?

There are so many raw fish dishes around the world that – even though sushi is the most famous – it would be naïve to think the Japanese popularised the idea. Hawaiian fishermen were eating their fish raw and cured for centuries after migrating to the islands, and this is the true origin of Poke. Poke translates as “to cut crosswise into pieces” in Hawaiian, essentially describing the process of dicing fish into small bite-size chunks. Poke in it’s most traditional form is fish that has been gutted, skinned and deboned, and served with Hawaiian condiments such as sea salt, candlenut, seaweed, and limu (algae native to Hawaii).

Poke was eaten in this fashion for generations, and it wasn’t until the 1970s that modern Poke started to make a mark on Hawaiian palates. But while the Poke being eaten in the 1970s was more like what we eat today, it was still just filleted raw fish served with Hawaiian salt, seaweed, and roasted, ground kukui nut meat.

The Poke explosion that we’re currently living through really started to take hold in the United States around 2012. This is where the influx of Asian flavours into Poke started. As control of Poke moved out of Hawaiian hands and into franchised shops on the mainland, the interpretation of Poke began to change. It started with Japanese flavours like soy, mirin and furikake mixed with raw tuna and salmon, and has pretty much run rampant from there.

Now you can get a variety of proteins instead of just the traditional raw fish. Tofu, chicken, beef and pork are regularly substituted in. Rice is regularly used as a filler, and vegetables like avocado, lettuce and even rocket are making their way into Poke. Even traditionally Korean sides like kimchi are being used, while sauces like teriyaki, ponzu and sriracha are regularly being added.

So what exactly is Poke these days? If you travel to the Hawaiian Islands, you can still find traditional style poke around the place. But modern food trends still like to combine – or fuse – different flavours from different cuisines to create something new and exciting. Just look at modern Australian cuisine and it’s a combination of local ingredients, classic European techniques and a huge culinary influence from Asia.

So I guess the answer is that Poke in its modern form isn’t really from anywhere. It’s traditionally Hawaiian, strongly influenced by Asia and popularized by the United States, so it’s a child of many mothers.

Check out some of our best Poke bowl recipes you can make in your own home: