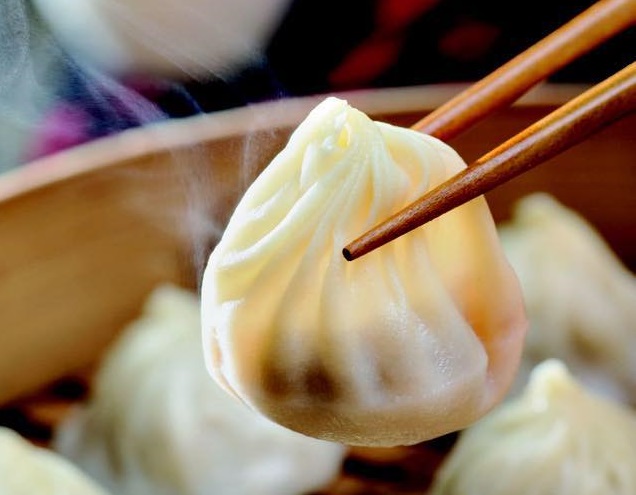 Asian cuisine is chock full of dumplings. There’s gyoza, xiao long bao, siu mai and they’re just the ones you’ve heard of. But whether they’re steamed, fried, boiled or baked, what they all have in common is a delicious stuffing wrapped in a doughy skin. Delicious parcels of joy that, if you’re not careful, will explode in your mouth like a lava bomb. Kind of like the first bite into meat pie or a jam donut at the footy, you’ve got to be a bit careful.

But while eating dumplings—temperature warnings aside—is the easy part, making them can be a fun and rewarding experience too. You’ve probably walked past a dumpling restaurant and seen someone whipping up dumplings in the window and felt a bit intimidated. Well, don’t. No one expects you to reach that level right away, and making tasty wrapped treats is not as hard as you think.

To help you on your way, we’ve put together a beginner’s guide to dumpling construction. Follow these tips, and you’ll be a master builder in no time!

Make your own skins!

It super simple—and a serious time saver—to just head down to your local Asian supermarket and grab a bag of dumpling skins, but trust us, you’re doing the dish a disservice. There is nothing better than a freshly made dumpling with homemade dough. If you’ve ever baked bread, made pasta or rolled your own pastry, you’ll know what I’m talking about. Find a recipe from someone you trust—like us!—and take the time to roll out your own skins. You won’t regret it.

Beijing wasn’t built in a day, but dumplings can be. Add the water or oil—or both—slowly as you stir to avoid lumps. Give the dough time to rest; you can’t rush it or you’ll be stuck with a super dense skin. And make sure you knead it on a flowered surface and roll it out evenly. The thickness is up to you; as always, please yourself first!

If you’re using mince, be aware that the lean varieties tend to dry out during the cooking. It’s one of the reasons pork and its higher fat content is widely preferred to beef. Chicken is a great substitute if you’re not a pork fan, but make sure you add some ginger or garlic or other favourites as flavour, as it can sometimes be a little bland. A lot of dumplings call for prawns to be added to a meat mix. Everyone loves a good prawn, but if you’re mixing them in with rich meats, spices and then dunking them in vinegar and soy sauce, they tend to get a bit lost. We find with seafood, it’s best to champion it in its own dumpling rather than drown it out with other flavours.

Cabbage is often paired with the pork, but garlic chives, finely chopped leafy greens like gai lan, spring onions and whatever else is fresh and delicious will suffice. To be honest, you can pretty much add whichever veggies you love and are in season. Just make sure you finely chop them so no one ends up choking on a big piece of leaf.

If you’re making soup dumplings, boil the broth for as long as possible to get as much collagen and flavour out of the bones and veggies you’re using. The soup has to go in while it’s in a jelly-like state, and you only get that after you’ve wrung every last bit of deliciousness out of the carcass. You could add gelatin, but that’s cheating!

Some recipes suggest using a food processor or blender to mix all the ingredients, but we find that produces a paste rather than a chunky textured dumpling filling. A big bowl and your hands should be more than fine to mix all your tasty choices together. And far easier to clean.

Without a doubt the hardest and most frustrating part, wrapping is the main reason more amateur chefs don’t tackle dumplings. But remember, while your mutant looking dumplings may get a few laughs when they’re served, if they’re delicious, no one will care what they look like. So make sure you get the flavours right first. As far as the wrapping goes, this is one of those things that just takes practice. There are some great books out there with pictures and detailed instructions, but seeing as we live in the internet age, we suggest finding an instructional video on YouTube or on a trusted food website—like us! These will walk you through the process and you can rewind and rewatch the most difficult sections as many times as you want.

I love a pan-fried dumpling, but make sure you add some water to the pan when you first put the dumplings in so you get that lovely steamed top half to go with the crispy bottom. Dumplings can be rich, heavy things, and if you tend to find frying a bit of overkill, then the next best option is boiling. It creates a uniform texture and a softer skin, but won’t impart any extra flavour onto the dumpling, which many people enjoy. If you’re making soup dumplings, bao or particularly delicate dumplings, then steaming is the way to go. It’s the gentlest form of cooking and will help keep the structural integrity of the dumpling.

The icing on the dumpling cake if you will. If you wander down to China town, you’ll probably find Chinese vinegar, soy sauce and chilli oil on offer, and these are all excellent choices. We prefer using light soy so it doesn’t overpower the dumpling and chopped fresh chilli for those that like theirs a bit hotter is always a great option.

We hope this helps you in your quest for the perfect dumpling. We have a bunch of great recipes for you to try and would love to hear from you if we’ve missed anything!