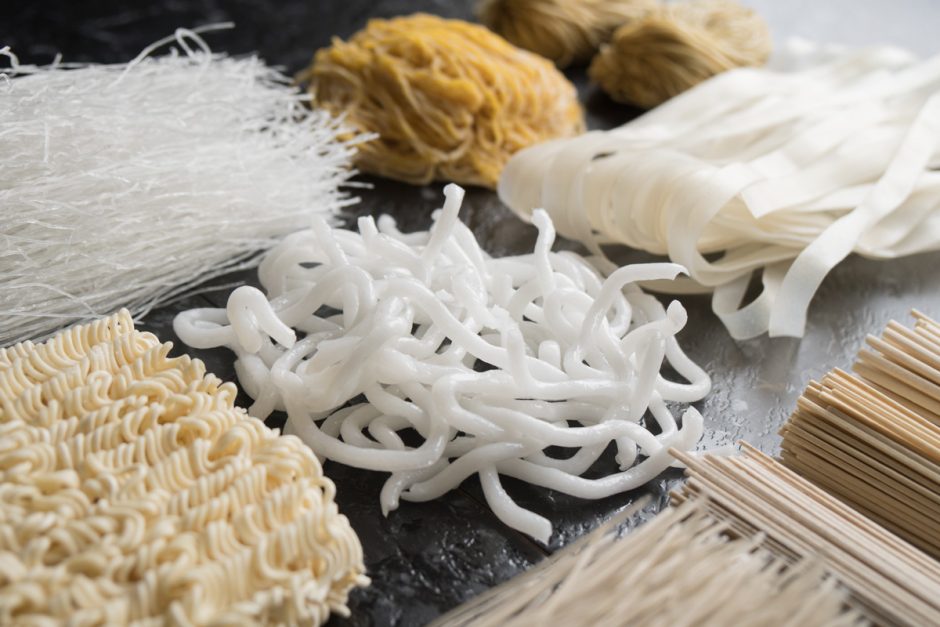 We eat them in soup, stir-fried, cold in salads, dried, in 2-minute packs and that’s just scratching the surface. But how many noodle varieties can you actually name? The noodle game is more complex than most diners care to realise, and can be quite confusing if you’re wading into it for the first time.

The differences are subtle, and in a lot of cases are little more than cosmetic or due to the preference of the region. But to stop you stumbling around in metaphorical noodle-darkness, we’ve prepared a guide to noodles from around Asia, so next time you go for pho or ramen, you can tell the difference!

The easiest way to differentiate is by base ingredient, so we’ll start there.

By far the most populous and confusing category of noodle. So for simplicities sake, let’s stick to the most common types.

Very pale, thick, chewy wheat noodles from Japan. Commonly served hot in soup dishes, though they’re also served cold in summer. Their neutral flavour makes them a great foil for strong flavours like soy sauce and ginger, meaning they’re great in stir-fries. A true all-rounder, you can find them dried in packs in your supermarket.

Traditionally hand pulled with the aid of vegetable oil, these dried Japanese noodles are now mass produced by machines. Air dried and often served cold with dipping sauces, you’ll still find them in soups and stir-fries. They even come in a variety of colours.

A thick, creamy-coloured and chewy noodle that’s great for Chinese recipes where a thicker noodle is required. They’re particularly good in stir-fries and hearty soups.

Sometimes called ‘ribbon’ noodles, these broad, flat and dried Chinese noodles are similar in many ways to parpadelle, with some brands even adding frilly edges. Originally from northern China, the traditional knife-cut noodles, or dao xioa mian, were made by hand and used fresh.

These noodles either contain egg or look like they do thanks to the addition of alkalizing agents that raise the pH level. This gives the noodle a chewier texture and releases yellow pigments in the flour, giving the noodles the same colour as those with egg.

A chewy noodle with a deep yellow colour thanks to the presence of alkaline agents. Popular in Singapore and Malaysia, they’re the basis of famous hawker dishes such as hokkien mee, curry mee and loh mee, and can be bought fresh in supermarkets.

A Japanese wheat noodle that started life in China, fresh ramen are thin and long, with a pronounced chew and yellow colour. The original alkalising agent was kansui, a water that’s rich in the minerals sodium carbonate and potassium carbonate, but these days’ agents such as lye water are commonly used and can give fresh ramen a slightly weird smell.

Buckwheat flour is quite nutritious, containing plenty of fibre, protein and high levels of manganese. It has a slightly nutty – some say earthy – flavour, and is quite popular in Korea and Japan. These days, most commercially produced noodles contain wheat flour as well as buckwheat, as buckwheat flour lacks gluten and gluten is important for the strength of the noodle.

These noodles take their name from the Japanese word for buckwheat. Light brown and thin, they’re served cold in summer months while also appearing in broth, or drained and with a dipping sauce when the weather turns cold.

Rice noodles come in a range of shapes and sizes, and are made from rice flour and water. Their soft texture and mild flavour make them the perfect body to carry all sorts of flavours, whether bold or subtle. Rice noodles appear in everything from salads to soups to stir fries, as well as an accompaniment to curries and grills. They cook incredibly quickly, with some types just needing a quick soaking. Noodles made with 100 per cent rice flour are gluten-free.

Bee hoon to the Malays, mie fen in Chinese, sen mee in Thai and bun for the Vietnamese, this popular thin, dried rice noodle have a very neutral flavour and are used in everything across a range of cuisines. Equally great in laksa as they are in rice paper rolls, chances are you’ve eaten these and never known its name.

Eaten Pad Thai? Then you’ve eaten these. Elastic and strong, they work great in stir-fries as they won’t break apart, and they only require a quick soak before cooking.

These are a fresh, flat, wide noodle that is popular in Cantonese cuisine, often rolled into little bite-sized morsels. They’re sold in plastic bags, so try to buy ones that haven’t been refrigerated as this hardens their texture and they’ll break apart when cooked. In Malaysia they’re called kway teow and are about 1cm wide. There, and in Singapore, they lend their name to the famous stir-fried dish char kway teow.

This family of (mainly) dried noodle is translucent, with a polished sheen that makes them resemble plastic in their raw state. They’re made using vegetable starches, not flour, and the vegetables range from mung bean, cassava, potato, sweet potato and tapioca to yams. They’re also gluten-free.

Also called cellophane or glass noodles, these extremely fine, tough noodles are made from water and bean starch and are sold in wiry, dried bundles. They’re used right across Asia, from spring roll stuffings to stir fries to soups to salads. They absorb flavours and liquid well and require lots of sauce/dressing to avoid being overly bland.

These light brown noodles are made using sweet potato starch and are the noodle you find in japchae. Find them at any Korean food store. There is also a Chinese version, used in Sichuan cooking, and they’re much wider.