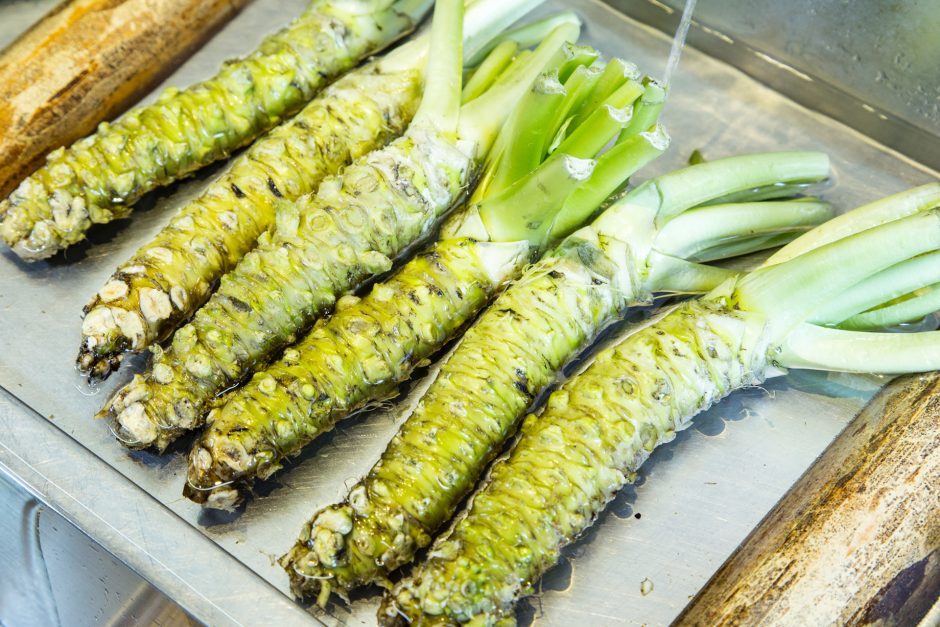 Wasabi―the pungent green paste served with sushi that threatens to blow your head off. Or at least give your sinuses a really good cleaning. This little plant is a cousin to horseradish and mustard, hence why its heat hits you in the nose rather than setting your mouth on fire like chillies do.

It’s also known as Japanese horseradish and is native to Japan, growing along stream beds in mountain valleys.

It’s actually a very difficult plant to cultivate. As it needs perfect conditions to thrive, the majority of commercial farms are based in a few select locales in Japan. This keeps the price of the plant high and its availability scarce. In fact, odds are you’ve never actually tried the real thing. That light green paste nestled next to the pink pickled ginger in your box of sushi? It’s most likely a mix of mustard, European horseradish, and food colouring.

Shockingly, by some estimates, only 5% of the wasabi served in Japanese restaurants around the world comes from the rhizome of a wasabi plant. The issue is just how delicate a crop wasabi is. If exposed to too much humidity, direct sunlight or water, they die off very quickly. Feed them the wrong mix of nutrients, and they die off very quickly. And the issues only multiply when wasabi is planted in commercial quantities. They’re extremely vulnerable to disease and pests, and don’t react well to pesticides. It’s an evolutionary marvel that wasabi exists in any form today!

However, it’s not all doom and gloom on the wasabi farming front. Some enterprising farmers in Tasmania have had some success cultivating wasabi in commercial quantities. Tasmania’s climate―cool, with decent amounts of rain and relatively low humidity―and soil composition have helped to no end, but the farmers have had to rely on experimentation and a lot of passion to get to where they are now.

Shima Wasabi―founded by Stephen and Karen Welsh―is a prime example of Australian innovation, especially when you consider the hurdles they’ve had to clear to produce wasabi.

The Japanese are quite protective of their tear-inducing produce, so getting your hands on offshoots and seeds is extremely difficult and costly.

Based in Northdown in northern Tasmania, about an hour’s drive west of Launceston, Shima are Australia’s largest commercial wasabi farm and have utilised a unique hydroponic method to help their wasabi flourish.

Mr. Welsh told the Weekly Times Now: “Wasabi is like a 15-year-old. When conditions are perfect and everything is how they like it they thrive, if something starts to go wrong though they will just sit there and sulk.”

The greenhouses aren’t heated, but do need to be cooled in the summer. This is done with a high pressure fogging system as anything heavier can damage or destroy the wasabi plants. The key is to keep the temperature below 20°C at all times; any warmer and the plants really don’t like it.

In Japan, it traditionally takes 2 years for a wasabi plant to reach the harvesting stage―Shima have shaved that time down to 12 months. They harvest the plant all year round, and plants can be partially harvested for around 5 years before needing to be replaced.

All plants are picked on the day to maximise their freshness, while low-grade plants are processed into 100% wasabi powder just down the road. There’s even a plan to cryovac and ship fresh stems around the world!

So next time you pick up a handroll, have a little think about the green stuff you spread on top.