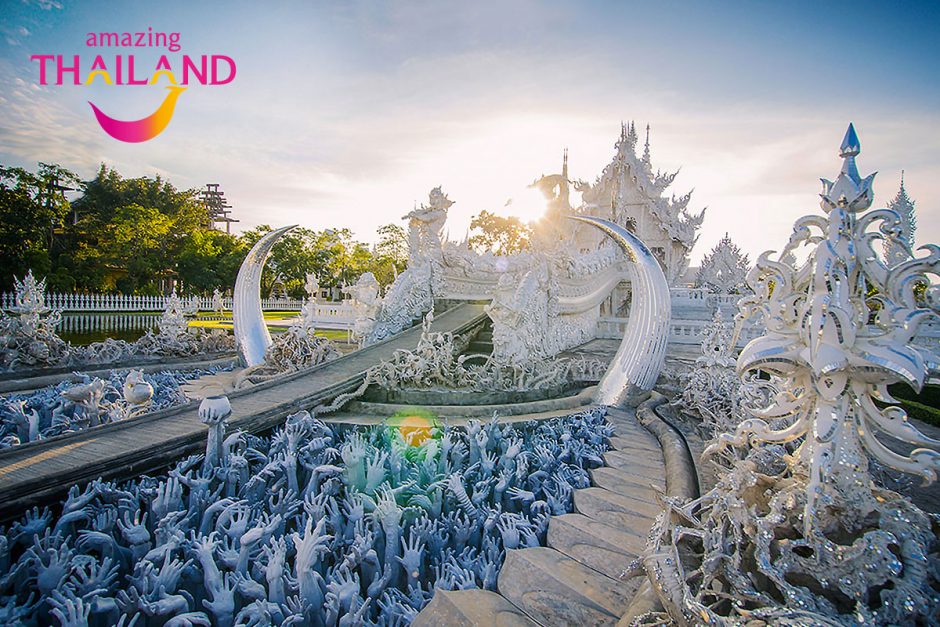 So, you’ve probably read a lot about bustling Bangkok and the exotic islands of Phuket or Koh Samui. They’re fun and exciting but crowded with tourists all year round.

Not really your thing?

If you’re a nature lover who prefers untouched authenticity and scenic adventures over hectic streets and beach parties, lose the sunscreen, grab your hiking shoes, and book a flight with Thai Airways to the beautiful and underrated Northern Thailand, a region of breathtaking mountains, valleys and waterfalls with four main cities; as well as the home to a rich, diverse culture of unique hill tribes. 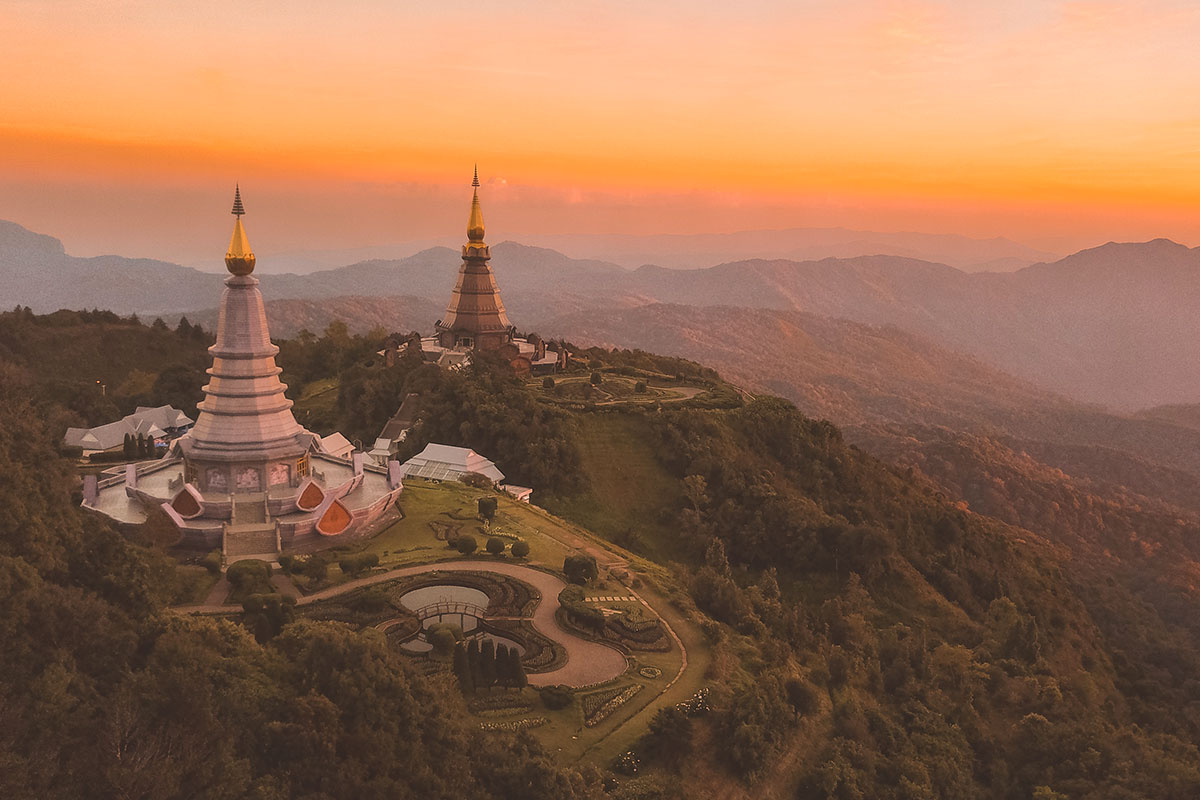 Once the capital of the Lanna Kingdom, fallen under Myanmar until the eventual Siamese revolt and returned to Thai rule since 1775, Chiang Mai is now the second-largest city after Bangkok, with centuries-old buildings still standing side by side with modern architecture. It is the centre of Buddhism in Northern Thailand, as well as the cultural core among various ethnic tribes.

The weather here is cooler than the rest of the country, with an average temperature of 25°C. The city is also surrounded by mountains and plateaus, including Thailand’s three highest peaks: Doi Inthanon, Doi Pha Hom Pok, and Doi Luang Chiang Dao. Each sits in its own protected national park a couple hours’ drive from downtown Chiang Mai, featuring scenic nature trails with stunning waterfalls, caves and luscious greenery.

There are also many historic pagodas and temples to explore in Chiang Mai, especially in the Old City, but the mountainside Wat Phra That Doi Suthep is considered one of the most iconic and sacred. Climb the 309 Naga balustrade steps where you'll first see the statue of the great white elephant said to have carried a shoulder bone relic of Buddha up to this site. Enter the temple proper and admire the majestic Chedi where the relic is enshrined. Take your time to walk the area. There are many beautiful sights to discover.

Want a special souvenir? Come back to the city and make your own! Ban Tawai and Wualai Street have a host of workshops for unique local handicrafts, as well as Thai silk and silver arts. Or shop at the Warorot Market during the day and visit the Night Bazaar within the Old City walls. Wualai Walking Street has a special Saturday night market with plenty of fashion items, handicraft, local-made products and yummy street food, while on Sunday nights, it’s the Tha Pae to Ratchadamneon Road that turns into another walking street market filled with hill-tribe vendors.

Chiang Mai is also a Thai food and coffee haven, with a variety of cafés, bars, restaurants and street food stalls. Unlike Southern Thai food, however, glutinous rice is the staple here, and dishes are made without the use of coconut milk. Other distinctive Northern ingredients include lemongrass, shrimp paste, fermented soybean and dried chillies, giving the dishes stronger, spicier flavours and aromas than Southern Thai cuisine. Must-try dishes include Khao Soi Noodles, Sai Ua sausage and the full palate of Nam Prik chilli dipping sauces. 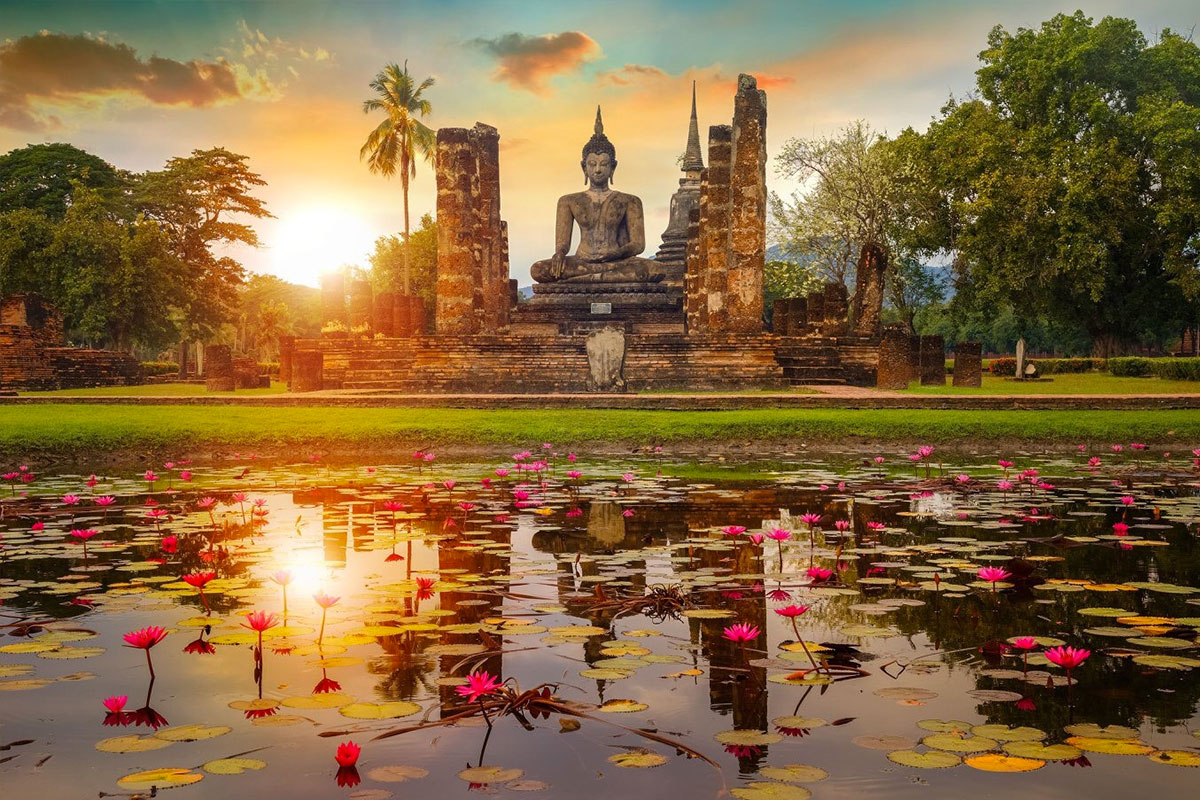 The very first capital of Thailand 700 years ago, Sukhothai literally means “the dawn of happiness”. It is the cradle of Thai civilisation that birthed the nation’s art, architecture and language during its golden age. Today, the city remains as Thailand’s historical heart after Ayutthaya, with monumental temple ruins housed inside the Sukhothai Historical Park.

Although a new urban area has been built nearby, much of Sukhothai is kept in a rustic aura. The Sukhothai Historical Park has over 190 ruins. Seven ancient Wats are the main highlights, including Wat Mahathat, the old kingdom’s spiritual centre, and Wat Phra Pai Luang, where Sukhothai was originally founded. Also within the park is the Ramkhamhaeng National Museum, displaying archaeological collections of stucco reliefs, inscribed stones and Sangkhalok ceramics. The Turiang Klin along the outer wall of Wat Phra Pai Luang was where these ceramic wares, a trade commodity with ancient China, were made.

Another UNESCO World Heritage Site is the Si Satchanalai Historical Park along the Yom River that includes the Sawanworanoyok National Museum, and eight notable temple ruins like Wat Chang Lom (with a Singhalese style chedi surrounded by sculptured elephants), as well as the Wat Phra Si Rattana Mahathat (which actually predates Sukthothai and was subsequently restored and expanded during the kingdom’s golden era).

You may also hike in the Ramkhamhaeng National Park, located at Sukhothai Historical Park’s northeast corner, a green mountainous wonderland teeming with wildlife.

The best time to visit Sukhothai is during the many local festivals. But perhaps the most exceptional celebration is the Loi Krathong, on the full moon night of the 12th Lunar month (November). Each year, buoyant lotus-shaped baskets are floated along the Yom River to venerate the goddess Mae Kong Kha, with lively cultural performances at the temples and fireworks in the night. 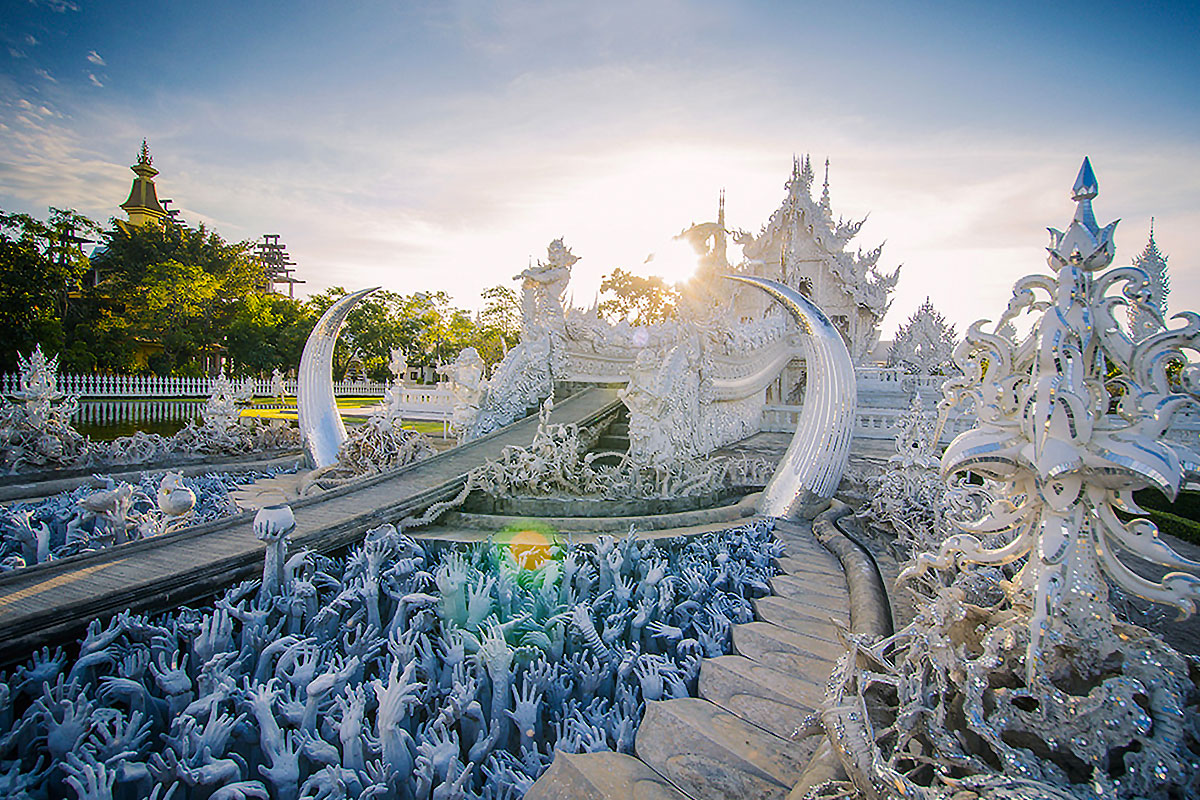 The northernmost province of Thailand and the western border city of the Golden Triangle; to the north lies Myanmar, with Laos to the east. Chiang Rai is also one of the oldest settlements in Thailand but has seen a new artistic movement in recent years that attempt to recapture and modernise its old Lanna cultural essence.

At the movement’s forefront is the reconstructed Wat Rong Khun, or White Temple, a 30-minute bus ride south of downtown Chiang Rai. A fairy-tale-castle-like monument with intricate carvings and sculptures that combine the mythical icons of Buddhist lore with contemporary design elements and pop culture figures. Surreal as it is, Wat Rong Khun is an actual Buddhist temple and home to a number of monks.

Standing in contrast to the opposite north, also a 30-minute bus ride from Chiang Rai, is the Baan Dam or Black House. Not a temple, but a whimsical gallery of grim, dark modern art since the 1970s, built and arranged like a Lanna Wat. Animal hides, bones, tribal sculptures and monochrome paintings fill the halls and rooms within. Although unsettling for some, discerning art lovers often praise its boldness and ‘playfulness’ in reinterpreting traditional Buddhist motifs. Baan Dam is a popular spot that even the local tourist offices would recommend.

However, the most recent addition to this art revival movement is the majestic Wat Rong Suea Ten or Blue Temple, near Chiang Rai’s Night Bazaar area. Built in 2016, this is a colourful temple of impressive carved sculptures, with a sapphire and gold façade, a massive white Buddha atop a pedestal inside, and surrounded by beautiful blue pillars and richly adorned walls. Nothing shocking or surreal here, though the artful deco is obviously modern with the vibrant blue ambience.

All three temples above are, in fact, created by renowned Thai artists, with new structures and sculptures still being added or completed at the White and Blue temples, while the Black House continues to feature fresh works by younger artists.

Chiang Rai has its own nature spot as well: The Doi Tung mountain with a spellbinding view of Myanmar and Thailand from its peak. The Doi Tung Royal Villa here is a former residence of the HM Princess Srinagrarindra. The mother of the present Thai King was instrumental in the reforestation of Doi Tung and had fought against opium cultivation, changing the local hill tribes’ agricultural produce to other cool-climate crops, and promoting eco-tourism and handicrafts to improve their livelihoods. 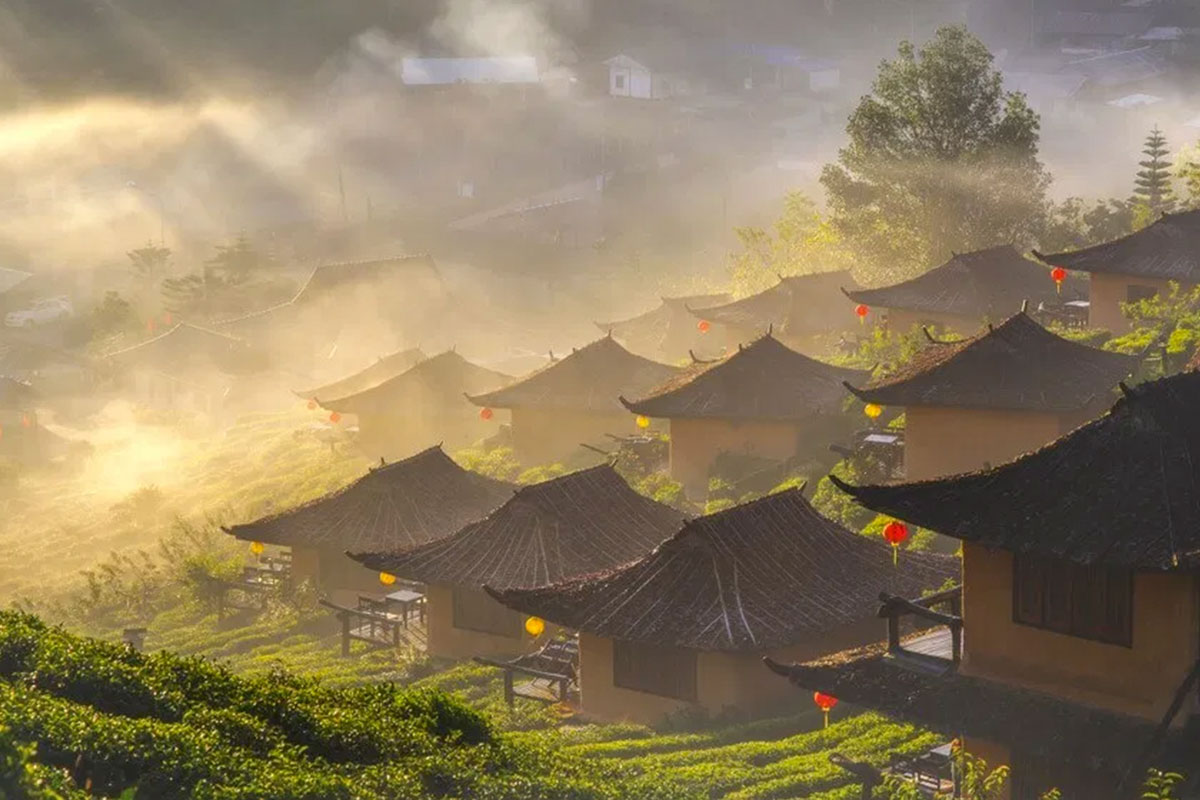 Nicknamed the City of Three Mists, northwest of Chiang Mai, Mae Hong Son is nestled in a deep rustic valley amid the most mountainous area in Thailand. Home to the backpackers’ favourite village of Pai, this province is famed for its tranquil charm and natural attractions, including the Pang Oung lake and Tham Lot Cave with its amazing rock formations.

Also visit the friendly local tribal communities, as well as the twin Burmese-style temples of Wat Chong Kham and Wat Chong Klang overlooking the beautiful Nong Kham Lake. Here is a true heaven for adventurous hikers and nature lovers, far from the outside world.

So, there you have it: An overview of what makes Northern Thailand an awesome destination. Learn more details about the region at amazingthailand.com.au.