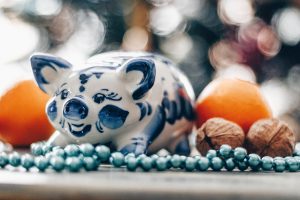 The 'pig' is the last zodiac animal in the Chinese horoscope - completing a full rotation cycle of the 12 zodiac signs.

Welcome to the year of the Pig! The new lunar year kicks off officially on Tuesday 5th of February, but a lot of the official celebrations are being saved for the weekend.

The pig is the twelfth animal on the zodiac calendar and represents luck, wealth, honesty and general prosperity. Legend has it that the order of the calendar was determined by the order the animals arrived at the Jade Emperor’s palace. The pig was late because he overslept. Or a wolf destroyed his house. Everyone’s a bit fuzzy on the finer details, but they all agree pig was late.

Lunar new year celebrations across Asia are plentiful and spectacular. Hong Kong has a firework display comparable to Sydney’s new year celebrations, In Japan, Tokyo tower was lit up in red and cities all over the continent empty as residents head home to celebrate with their families.

Australia is rich with Asian immigrants and culture, and celebrations here are becoming bigger and better every year. Sydney’s celebrations are now considered to be the largest such event outside Asia. When you consider the Asian populations spread across the globe, that’s a fair effort. According to the BBC, 1.4 million people attended 80 events across Sydney. That’s roughly 25% of the city’s population getting involved.

Celebrations generally stretch for 2 weeks from the last day of the previous lunar year to the lantern ceremony, and all of Australia’s major cities and a lot of smaller centres hold events throughout the 2 weeks.

Melbourne’s Crown Casino has plenty of spectacular events including lion dancers, fireworks and plenty of food. You’ll even find Asian Inspirations down there creating some culinary sensations. We’ll be there on Friday 8th to Sunday the 10th with a whole raft of great cooking demos and events. Check our website for more details. Fed Square and Chinatown are also being co-opted for the 2 weeks with a whole host of events planned for Melbourne’s central meeting spot.

Sydney’s celebration center is the famous Chinatown district. They’ll be plenty of entertainment, traditional firecrackers and plenty of great food on offer. Don’t forget to head down to Darling Harbour to check out the dragon boat races!

Fortitude Valley is where it’s all happening up in Brisbane. The Chinatown Mall will become the temporary home of lion dancers, fire shows and roving street performers, while the Queen Street Mall in the city plays host to a whole heap of different displays and plenty of pop-up food stalls.

A street parade, lion and dragon dances, games, rides and music will draw tens of thousands of people to Perth’s Chinatown in Northbridge. Elsewhere Crown Perth is hosting a series of lion dance performances as part of its Lunar New Year offerings, while for some seaside Chinese New Year fun, you can head to Sorrento Quay.

In Hobart, Parliament House will host the lunar new year festivities, while there are some spectacular lantern nights planned around the harbour.

Make sure you get down to check out some of these great events and check our website for even more!