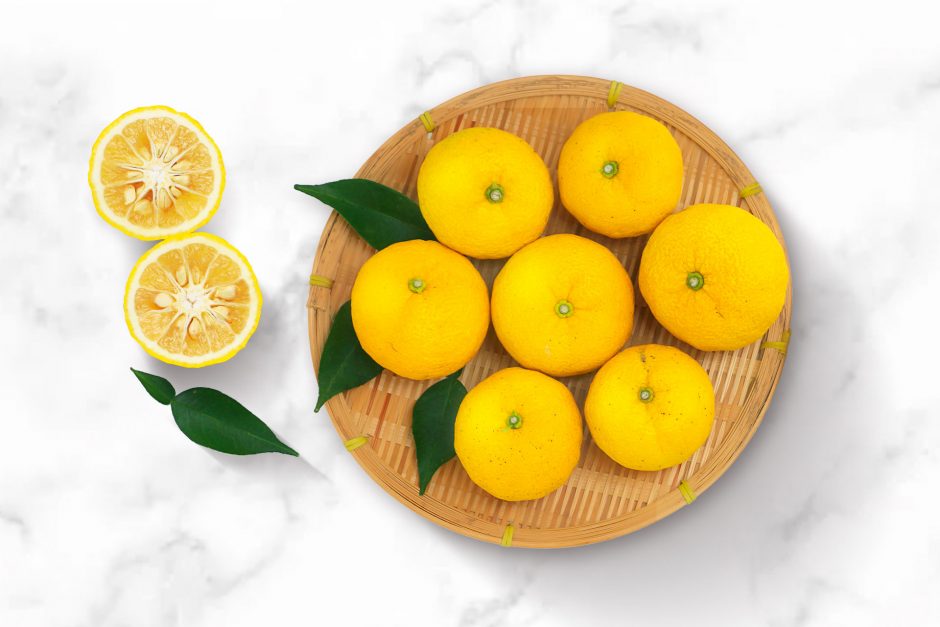 Slightly larger than a mandarin orange, tastier than a lemon, more fragrant and versatile than perhaps every other citrus fruit – Yuzu has long been a key ingredient in Japanese culinary; used in soups, sushi, tea, liquors, salad dressings, desserts, pastries, and even made into marmalade. Besides cooking, Yuzu also adds a special aroma for hot baths, or juiced and mixed with jojoba to make a zesty essential oil. Though initially prized in Japan and Korea, Yuzu is now fast becoming a chefs’ favourite worldwide, especially in Australia.

Why? Let’s find out!

Often described as a cross between grapefruit, lime and mandarin orange, Yuzu was first discovered in the wilds of China’s Yangtze River region, more than 1,200 years ago; then cultivated and introduced to Japanese farmers during the Nara Period (710-794 AD). Since then, Yuzu has become integral to Japanese culture for cooking, hot bathing and medicine. In recent years, bottled juice, freeze-dried and powdered Yuzu are also exported and can be found in Asian grocers.

It’s not an easy fruit to grow, however. There’s even a Japanese saying: ‘it takes 3 years for chestnuts, 8 years for persimmons, but 13 years for stubborn Yuzu’. But today, you can get this wonder fruit in Australia too, thanks to growers like Gerard “Buck” Buchanan, who started over 20 years ago, and now supplies Yuzu to famed restaurants in New South Wales and Queensland.

Yuzu is rich in Vitamin C (thrice the amount found in lemons!), Vitamin E, potassium, calcium, magnesium and copper, with just a little over 20 calories per 100-gram serving. The exclusive Yuzunone and Yuzuol fruit essences which give its floral aroma also have antioxidant effects that fend off chronic diseases.

Instead of sweeteners, mix the juice with honey to make a Korean Yuja Chung flavouring for your tea. For salad dressing: whisk the juice with grapeseed oil, soy sauce and garlic, then season with salt and pepper. For other dishes, just a few drops of Yuzu juice gives a much more savoury tang than lemon or lime. Want a special, refreshing drink? Make your own Yuzu sparkling gimlet: prep a syrup with sugar and water, add mint, basil and sliced cucumber, stir in Yuzu juice with vodka and sparkling water; then serve with ice.

Those are just a few examples of what you can do with Yuzu. There’s a world of potential. Want more ideas? Check out our recipes!