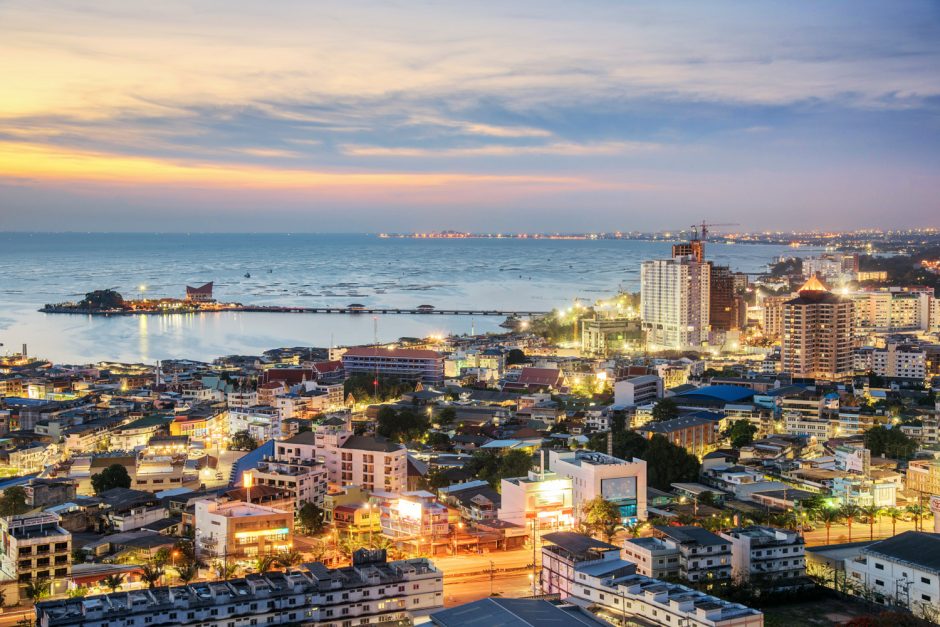 Si Racha is the town synonymous with the world’s favourite chilli sauce, but there’s a lot more to see here than a bottling factory. The city has a unique blend of traditional and modern Thai cultures and has plenty to offer visitors. Colourful, creaking fishing boats and squid rigs share the water with giant container ships, while a building boom is overshadowing – literally – the traditionally low-rise city-centre with towering apartment blocks and hotels.

Si Racha is nestled snugly on Thailands east coast about 2 hours drive south of Bangkok in the province of Chonburi. Si Racha started life as a small fishing town, but there is evidence of human occupation dating back to the stone age. The city grew slowly as the Chinese started trading with what was then Siam, and trade started to enter through the port of Laem Chabang. Today Laem Chabang is Thailand’s largest port, handling over 7.7 million containers in 2017. It’s also port of call for major cruise lines.

How to get there

A whole host of major air carriers fly directly to Bangkok from Australian capital cities. From there, you can take buses, trains or hire a tuk-tuk if you’re feeling brave. Otherwise some resorts will arrange a transfer from Bangkok to Si Racha.

If you’re more aquatically inclined, you can book boat passage from Bangkok as well, or simply buy a ticket on a cruise ship that makes a stop at Si Racha.

The best time to visit for optimal weather is November through to March, but if you’re looking to avoid crowds then February through April will give you the most space to breathe.

The most authentic and fun places to stay are the wooden hotels on the pier. If you’re not travelling on a shoestring then it’s best to stay at one of the more expensive dwellings, as the cheaper ones are very basic.

Back in the city centre, you can find boutique hotels and some resorts if that’s more your speed. Otherwise, day tripping from Bangkok is a solid option.

The waterfront is beautiful and there are some nice restaurants down by the ocean. Si Racha has a zoo with some spectacular tigers, but don’t expect the same conditions you’d get in Australia. There’s also some marine parks where you can see some of the local sea life. If you’re looking for nightlife, here’s a lively knot of Thai bars along Thetsaban. Northwest of there you’ll find a solid grid of karaoke bars catering to Japanese expat workers.

A day trip to the white beaches of is Ko Si Chang is also highly recommended.

You’ll find the usual roadside stalls selling pad thai and satay, but you’ll want to get stuck into the local seafood.

The crab, prawns and fish are all caught locally and prepared for pretty reasonable prices in a host of restaurants throughout the city.

Due to a large amount of ex-pat Japanese workers, there are also quite a few quality Japanese eateries if you need a change from the local Thai fare.

How to get around

You can walk most places you need to around Si Racha, but if you’re struggling with the heat then there are the ever-reliable tuk-tuks rolling around town. There’s also plenty of day trips you can take via boat and taxis and buses if you’re feeling adventurous.

If you’re hell-bent on driving yourself around, then hire a scooter. But be warned, south-east Asian traffic is not for the faint-hearted.