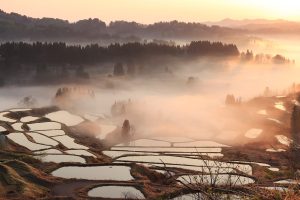 Niigata is sometimes called the City of Water due to its contact with several bodies of water such as the Sea of Japan, its multitude of wetlands, and the canals that flow through the city.

When it comes to natural resources, the prefecture of Niigata stands out as one of the few prefectures in Japan with petroleum reserves, and once had a booming gold mine that was in operation from the 17th century right up to its closure in 1989. But despite having both black and actual gold, Niigata is more well-known for its rice, which forms a major export for the prefecture.

Thanks to the Echigo Mountain Range – that occupies the south-eastern part of the prefecture – the Niigata region is irrigated by several rivers, which includes the Shinano River, the longest river in Japan that flows down from the mountains in land-locked Nagano, and into the Sea of Japan. This makes it ideal for rice farming.

Niigata is particularly famous for a variety of rice known as Koshihikari from its Uonuma region. Regarded as the highest-quality rice in the country, farmers attribute the quality of Koshihikari rice to the steady supply of pure water from the melted snow of the Echigo Mountains. The abundance of quality rice from Niigata and clean mountain water also makes Niigata home to many of Japan’s leading sake breweries.

Due to its rice and seafood produce, much of Niigata’s local cuisine features familiar Japanese cuisines such as sushi and rice crackers, though there are a few cuisines unique to the prefecture. These include the Kiwami 10-piece sushi dish, Noppei Jiru vegetable soup, Sasa Dango mugwort-flavoured mochi that is traditionally wrapped in bamboo leaves, and Hegi Soba – a soba made from high-quality buckwheat mixed with seaweed and served in individual clusters on a wooden “hegi” dish – that is best eaten in one mouthful.

Although Niigata is a coastal prefecture, with beautiful and idyllic beaches, it is more renowned for its mountain ranges and numerous ski resorts, which makes it a popular winter destination – a reputation it shares with its neighbouring prefecture, Nagano. Niigata also celebrates its reputation as a winter destination with its tourism mascot, “Lerch-san”. The cartoon character is modelled after real-life Austro-Hungarian army officer, Theodor Edler von Lerch, who is said to have introduced Japan to the sport of skiing in 1911.

But winter isn’t Niigata’s only draw. Over the summer months, Niigata plays host to numerous fireworks festivals that take place on a near-weekly basis around the prefecture. The three main firework events are those held in Kashiwazaki (July 26, 2017), Nagaoka (August 2-3, 2017), and Katakai (September 9-10, 2017). Visitors to Niigata in spring can not only catch the beautiful flower blooms, but also witness the largest giant kite battle in the world, the Shirone Giant Kite Battle where massive 7x5m kites collide into each other and fight over the Nakanokuchi riverbanks.

Niigata will be one of five Japanese prefectures to be featured at the Experience Japan 2017 fair. Unlike other prefectures, Niigata will be showcasing their prefecture’s natural and cultural highlights together with those from its neighbouring prefecture, Nagano. Key highlights include snack and traditional rice ball tasting. Held in conjunction with the Iron Chef All Stars 2017 charity dinner, the Experience Japan fair will be held on the 2nd and 3rd of August at the Sydney Opera House. The fair will be showcasing the best of Japanese culture and produce, with performances, tasting stations, and limited exclusive Iron Chef show bags on offer for eligible attendees. Book your tickets now at the Sydney Opera House Box Office.