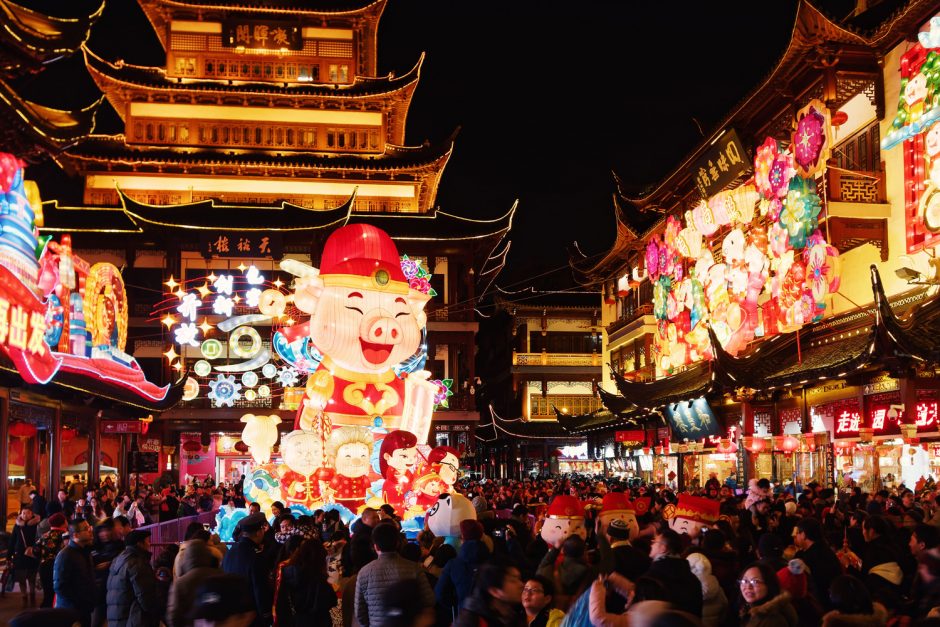 Australia does a pretty good job of celebrating the Lunar New Year festival. In fact, Sydney’s celebrations are considered the largest outside of Asia.

But just because we do it well doesn’t mean we can’t show interest or learn a few things from how others around the globe. Or even better, head over there and check it out for ourselves.

Here’s a guide to celebrating the Lunar New Year around the world.

The most obvious place to start, China and it’s mega-cities go all out to bring in the lunar new year. Shanghai pulls out all the stops with dazzling lantern displays and adorns the Yuyuan Old Town Bazaar in red and gold. For some retail recovery, head Nanjing Road.

Beijing has one of the best fireworks displays in the world, and there’s plenty of cool places to check it out from. If you head a little further out of the city hire some skates and whiz/crash around/into the ice sculptures at the Longqing Gorge Ice and Snow Festival. If you’re simply here for the culture – the food! – head to Ditan Park for historical re-enactments and steaming pots filled with dumplings and hearty stews.

Fine, technically we’re still in China. But Hong Kong is one of the most spectacular places to bring in the new year. Victoria Harbour erupts with a fireworks display that seems to go on forever. There’s the annual parade full of fantastic floats in Tsim Sha Tsui. And what would a visit to Hong Kong be without the races! Head down to Sha Tin Racecourse on the third day of New Year for one of the biggest race days of the year.

The capital – Bangkok – is the place to be with vibrant celebrations throughout Chinatown, including lion dances and parades. Foodies wander the streets gobbling all the hawker food they can handle or book a table at one of the city’s top restaurants for an authentic experience off specially-curated menus.

If you’re after a gluttonous affair, Taipei is bursting with street food, seafood barbecues, bubbling hotpots and night markets during Chinese New Year. It’s fast becoming one of the great food cities, and for anyone who loves food, Taipei is becoming a must visit.

You’ll also get great shopping in one of the many markets, dances and fire displays, and pretty good fireworks display too!

Singapore has strong Chinese influences in its culture, so no surprises Chinatown is at the heart of the celebrations. Lion dance competitions, acrobatic shows and, of course, heaps of shopping. Singapore is also home to some of the best street food in the world, with the huge hawker halls offering all kinds of local delights. If you’re willing to spend a bit more, book into one of the many Michelin starred restaurants to sample some of the special new year dishes on offer.

Malaysia
Kuala Lumpur and it’s many temples are full of religious festivities worth checking out. if you’re after a temple tour, Thean Hou is definitely worth a visit. If drinking and eating is more your thing, head over to George Town on Penang Island and wander it’s beautifully lit streets and open-air markets and take in the dragon parades and fireworks. Stay at one of the historical jetty houses along the waterfront for a spectacular view and a memorable night.

Slightly different from the Chinese festival, the national holiday of Tết is celebrated across Vietnam. The markets and shops will be packed leading up to the festival, as local families stock up before making their way to Da Nang and Hội An. All the major cities will be packed, so make sure you book accommodation in advance. Ho Chi Minh City is the place to go for the most spectacular festivities, with public shows and concerts on offer. We suggest heading to around Pham Ngu Lao for the best stuff.

New York’s a great city, but it might be even better over the lunar new year. Check out the Firecracker Ceremony and Cultural Festival in Chinatown in Manhattan where colourful parades and – you guessed it – firecrackers abound. You can join special walking tours and even attend concerts hosted by the New York Philharmonic Orchestra.

If your more a west coast kinda soul, San Francisco’s Chinatown is the oldest in the US and features over 100 floats in its many parades. It’s also home to some of the best food in the states, so it’s a great place to fill up before heading out to check out the festivities.

No surprises that Paris puts on a great show! The city of light does alright. The Champs-Elysées is lined with giant floats, firecrackers, martial arts performers and dancing dragons, while the Eiffel Tower glows red. Walk through Chinatown and see the restaurants and shopfronts adorned in red and gold, and don’t forget to stop in for a bite. The wine’s pretty good too.

London hosts a one-day festival filled with dancers, performers and fireworks across Chinatown, Trafalgar Square and Shaftesbury Avenue. There are also smaller celebrations held in Manchester and York.