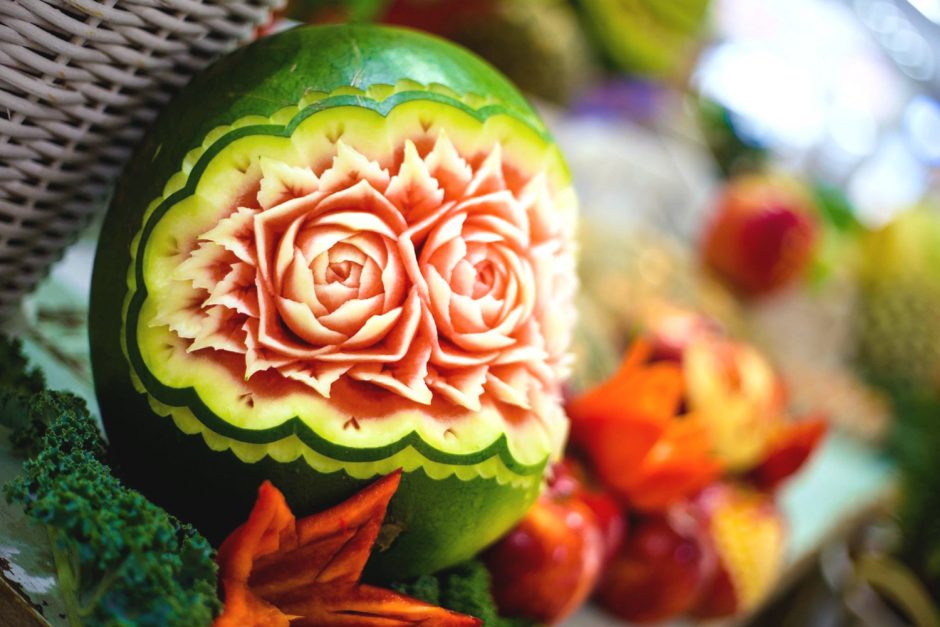 Edible bouquets are pretty great. I mean, they’re as beautiful as a bunch of flowers with the added advantage that you get to eat them! They come in all shapes and sizes and combine a variety of fruits, veggies and confectionary into eye-popping displays.

Food carving itself is thought to have originated in Thailand back in the 14th Century. The story goes that one of King Phra Ruang’s servants, Nang Noppamart, had the wanted to make a spectacular and unique decoration for her raft for the Loi Krathong festival. So Nang carved a vegetable into the shape of a flower. It looked pretty great, so she made a few more and decorated her raft with them. King Phra Ruang was so impressed by the carvings that he decreed that every woman should learn this new art. Such a male.

Today you can see this unique artistry all over Asia and in Asian restaurants across the world, as well as in some of the most spectacular edible bouquets going around. And while there are plenty of special fruit ninjas around the place carving out a place in the industry, Brisbane has a man who is using his skills with a blade for good.

Tong – he only goes by one name, like Cher or Prince – has been carving fruit for over 20 years. He first picked it up as a hobby back in his native Thailand and thought he’d be able to make a few bucks using his skills when he moved to Australia. Sadly, this was not the case.

“The real world is different, no one would hire me as a fruit carver because the labour costs were too high” laughs Tong. The traditions of food carving were not widely understood in Australia, so it wasn’t until Tong moved from Perth – some 15 years after emigrating from Thailand – to Brisbane, he started trying to turn his hobby into a career. “It’s just part of the culture in Thailand, but not Australia.”

After a slow start, demand for his skills continues to grow. Now he regularly gives public demonstrations of his skills partnered with big companies like Coles and Woolworths and has expanded his business from working at home by himself to working on a commercial scale.

Tong gets asked what’s his favourite food to carve all the time, but he laughs it off. “If I compare pumpkin, carrot, watermelon and cucumber, they’re all the same to me to carve. The most beautiful are the three-toned fruits (green skin, white rind and pink flesh) like watermelon, as they have a better presentation.”

Tong may have started his carving career in Thailand, but now he takes his inspiration from all over the world. “China for dragon and animal designs are the best, Thai’s are dominant for flowers, Vietnamese is a mixture between Thai and China, so they have some great concepts.”

While edible bouquets provide him with a livelihood, there’s more to producing his beautifully edible creations financial rewards. One of Tong’s passions is to make healthy food fun for kids.

“The kid programs are based on the 2 fruit 5 vegetables programs and uses fruit and vegetables as a medium for kids to play with and to eat as a healthy snack.” Tong holds carving workshops for kids and parents as a way to get children into healthy food, and to see it as less of a chore. “Beautiful food is more appealing. My kids never ate rockmelon until I carved it, and now they grab it and put it straight in their mouths. Parents (at his workshops) don’t stop smiling, they love their kids to have fun and eat healthy food.”

And if you can’t get through a whole bouquet in one sitting, what’s Tong’s secret to keeping his bouquets looking as stunning as the day they’re carved? “A little lemon juice! They’ll never turn brown again!”