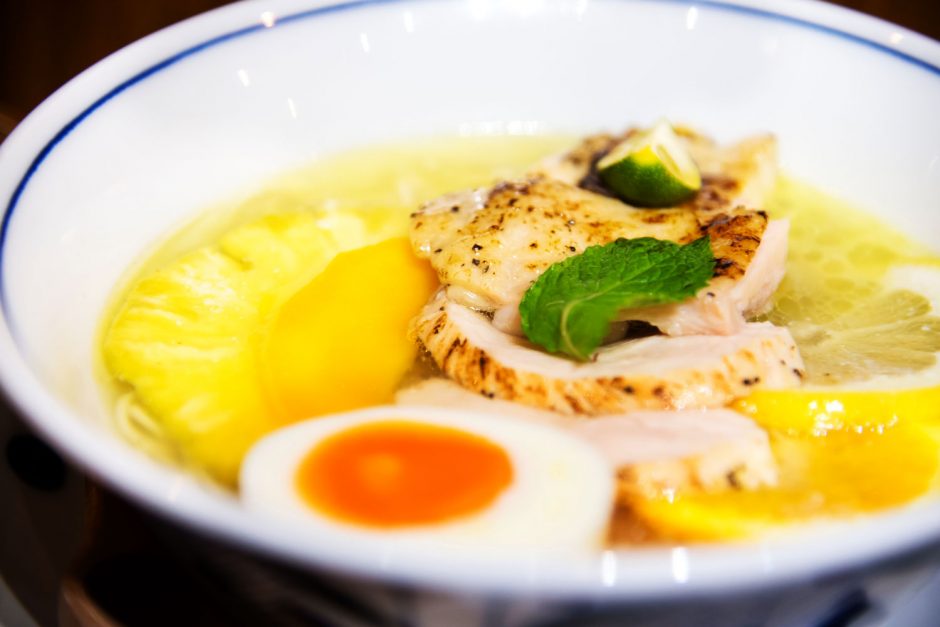 The Japanese are a bit weird. Despite the social stereotype that paints them as quiet, polite and proper, the truth is they like to do things a bit differently. Sometimes very differently. It’s a bit like how Mormons leave their community to party and basically go nuts for 12 months before returning to their conservative lifestyle. Except it’s an every-other-weekend sort of thing in Japan.

Think about it. This is the country that came up with cat cafés, and owl cafés, and—gross—maid cafes. A lot of weird cafés. And furry conventions. And bizarre vending machines. And the entire district of Shinjuku. Ever watched a Japanese game show? If you can understand what’s going on, you’re smarter than me.

And the weirdness extends into all walks of life—including food. Heard of poo curry? Sold in Japan. Even ramen gets a weird makeover by mad scientists masquerading as chefs.

Don’t believe me? You probably do, but here’s some proof anyway: A list of 5 of the weirdest ramen dishes served up in Japan.

At Uma Tsukemen, in the Tachikawa City suburb of Tokyo, they serve Tsukemen-style ramen—the one where the noodles and soup are served in different bowls—a little differently. The soup bowl is covered in a dome of crispy golden pastry. Why? No one’s really sure, but you can pick your broth from a selection of pork, shrimp, curry and miso, and choose from a variety of noodles. The idea is to pop off the pastry and go to town. My question is why have the pastry in the first place?

Rinsuzu Shokudo is a small ramen restaurant located near Oshima Station in northeast Tokyo, and they sell lemon ramen. Which is exactly what you think it is. A light chicken broth is covered in slices of lemon, which gives the soup a strong sour kick. It tends to look like you accidently dropped your noodles into a finger bowl, but it’s super popular with locals, so it must be okay.

Not quite as exciting as the name implies. The chicken and fish-based broth gets a shot of tequila thrown in, which gives the broth… the flavour of watered-down tequila. I thought the whole point of tequila was to shoot it so you don’t have to taste it, but I could be wrong. A specialty of ramen shop Menya Kono, it’s available to anyone aged 20 and over, and is served with a slice of lime. And coriander for some reason.

Aroma Café is a Kissaten (old fashioned Japanese cafe) located in the northeast of Tokyo, and they serve coffee ramen. It’s essentially what you get when someone tries to serve a complete breakfast in a single bowl and then adds ramen. It consists of coffee-flavoured soup and noodles topped with kiwifruit, banana, ham and a halved boiled egg. And then ice cream for some reason. Maybe for dessert? It’s not abundantly clear why they throw it on there, but at this point, does it really matter?

So here’s some more classic Japanese creepiness, except the woman being exploited owns the business and is exploiting herself.

Ramen Bar Snack Izakaya⁠—amazing name⁠—is a small ramen bar run by former pin-up model Takako Hayakawa. The menu features a meal named Oppai Ramen⁠—”oppai” is a common Japanese slang term for “big breasts”. You can kind of put two and two together, and see why the shop is so popular.

The ramen on offer is a light Shio-style soup served with aosa seaweed, yuzu kosho seasoning and lime, and while it’s not life-changing, the whole experience might be.