The Toyosu market is the brand-new replacement for the famous and historic Tsukiji market. It’s a futuristic complex that just opened from 2018 and is dedicated to all things fresh and foody.

There are two buildings for seafood and one for fruits and vegetables. Even better, there are restaurants with fresh seafood and produce from the market and shops and some places will even prepare your freshly bought catch right in front of you. It is built on reclaimed land in Tokyo Bay. Upon opening its doors in October it became the largest wholesale food market of any kind – wait for it – in the world!

The old Tsukiji fish market was right in the centre of Tokyo, and so was sitting on very valuable real estate. To take advantage of the price of the land and to reinvigorate the ancient market, The new Toyosu Market was planned and built. Including the reclamation of land in Tokyo Bay, the total cost was $5 billion US.

The original open date was supposed to be November 2016 so that effort could be concentrated on preparation for the 2020 Summer Olympics. But on August 31, 2016, the move was postponed due to concerns around pollution at the proposed site.

The suspicions were well founded as the site had been home to a gas plant and a number of toxic substances were discovered in the soil and groundwater. Tokyo had to spend an additional 3.8 billion yen ($33.5 million US) to pump out the groundwater through a series of bores.

Plans to move the fish market were begun anew in June 2017 but were delayed again due to further contamination concerns. Finally, after months of further cleanup, the new site was declared safe and the opening date 11 October 2018 was set and – thankfully – met.

The old Tsukiji market is planned to house a retail fish and food market, roughly a quarter of the size of the previous operation. The remaining area of the market will be redeveloped as housing.

6-3-1 Toyosu, Koto, Tokyo. The market is right in the heart of Tokyo near the Panasonic Centre and Tokyo Disney.

How to get there? 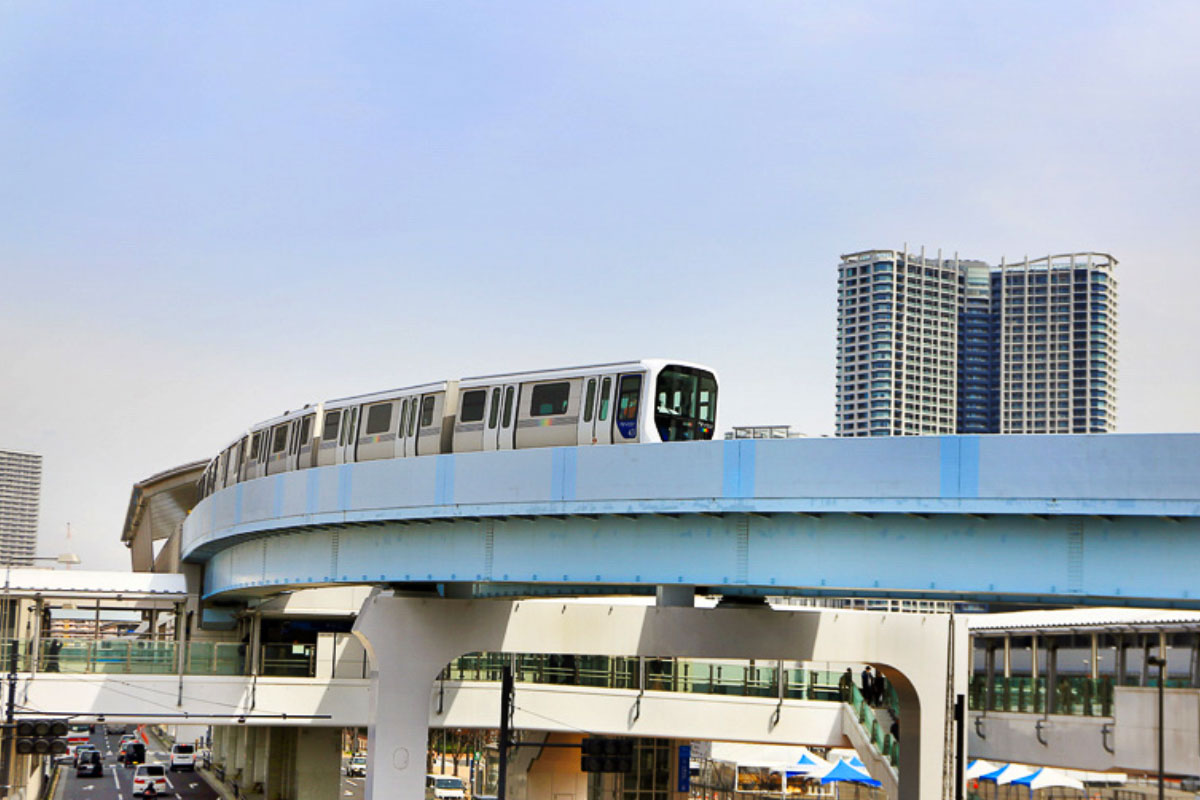 Qantas flies directly to Tokyo or with 1 stop from all major Australian cities. There’s also an official Toyosu station on the Yurakucho line, so getting to and from the market is easy. If you’re planning to head to the working market early in the morning to observe, the best idea is to book a tour as the trains won’t be running that early in the morning. These can be done online or via a travel agent in Australia or in Tokyo. If you want to go solo, then a cab or uber is your best bet.

The market works all year round, but the days are a little random depending on the season and year, so make sure you check the official market calendar before you head down.

As it’s right in the heart of Tokyo there are a plethora of options for everyone from backpackers to wealthy tuna shoppers. Our tip is to shop around and stay in a district that you like the most.

The majority of the working market is closed to visitors except for a select few of those on a lucky tour. The market consists of three main buildings: two buildings for seafood and one for fruit and veg. All the buildings are connected via walkways and there are numerous observation windows to check out the proceedings below. 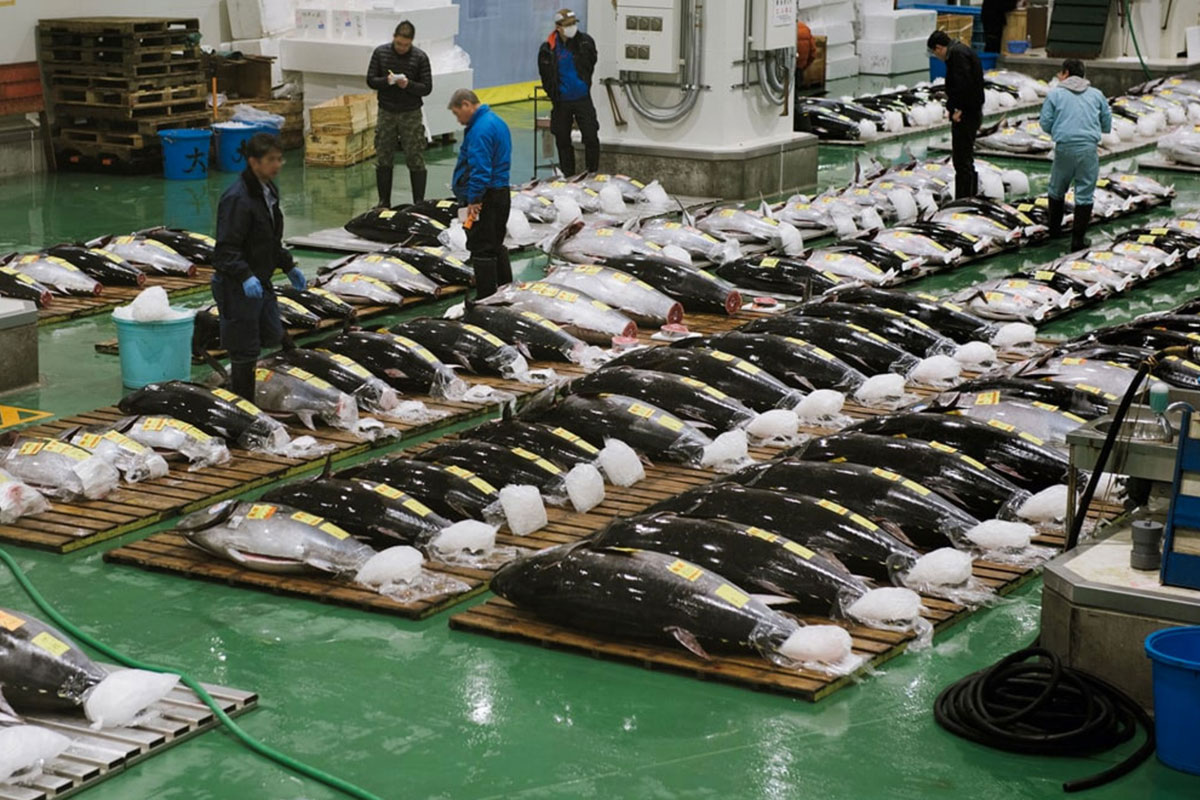 This is the building where the action happens! The tuna auctions take place between around 5:30 and 6:30 am in the main hall. You’ll recognise it by its green floor, which helps contrast the vivid red of the tuna. The other hall is for every other type of non-tuna seafood and has a grey floor. If you’re not on a tour, there’s a small restaurant area, heaps of windows and an observation deck to view everything. There is an observation platform on a lower floor separated from the action by only a single piece of glass. And it’s fully exposed to the noise and temperature of the auction hall. Sadly this platform will not open to the public until January 15, 2019. 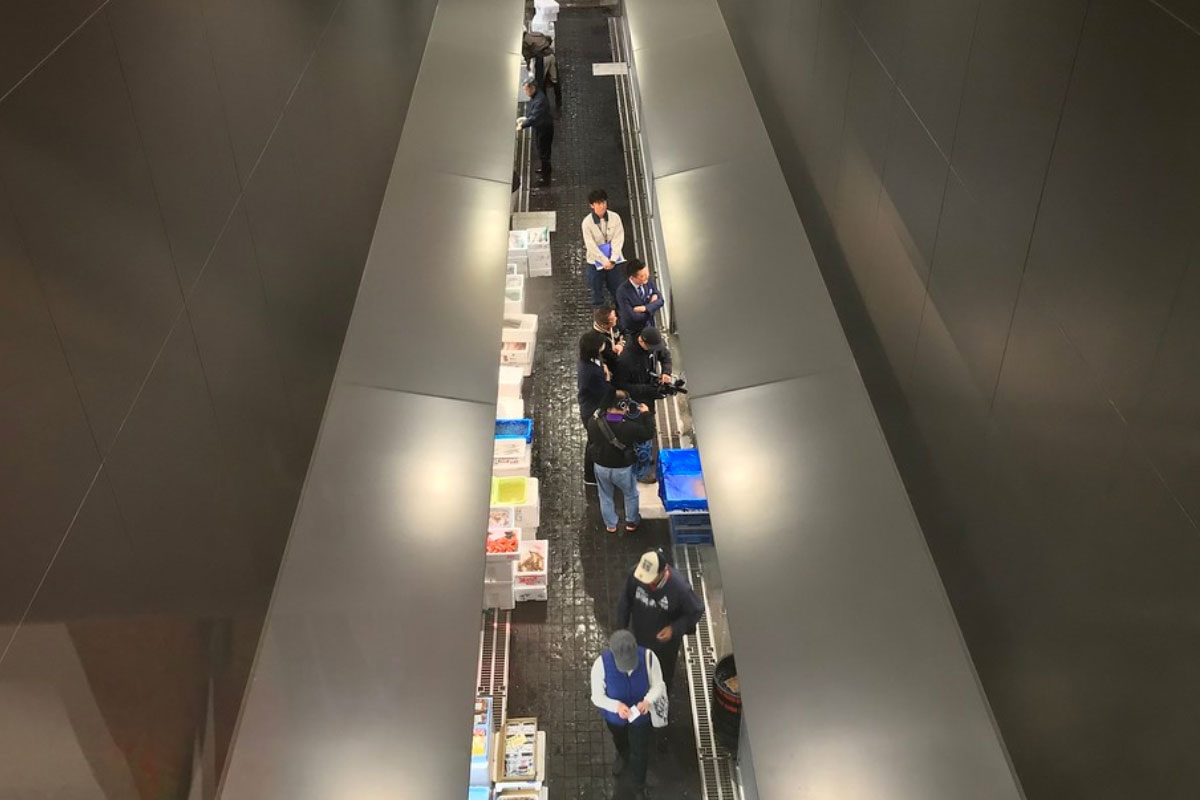 This is the building where all the wholesale businesses have their shops and sell seafood to licensed buyers. The wholesale market is off-limits to tourists but the building several attractions on its upper floors, including a restaurant area home to many of the restauranteurs who worked at Tsukiji. You won’t get sushi any fresher than here. There are also a few windows that look down onto the market floor and provide a rather limited view of the market action. The Yokocho Market is in this building and open to the general public. Over 70 shops sell non-perishable goods and processed foods in retail portions, including knives, pickles, tea and souvenirs. There’s also a spacious rooftop garden with lawn space and great views of Tokyo Bay. 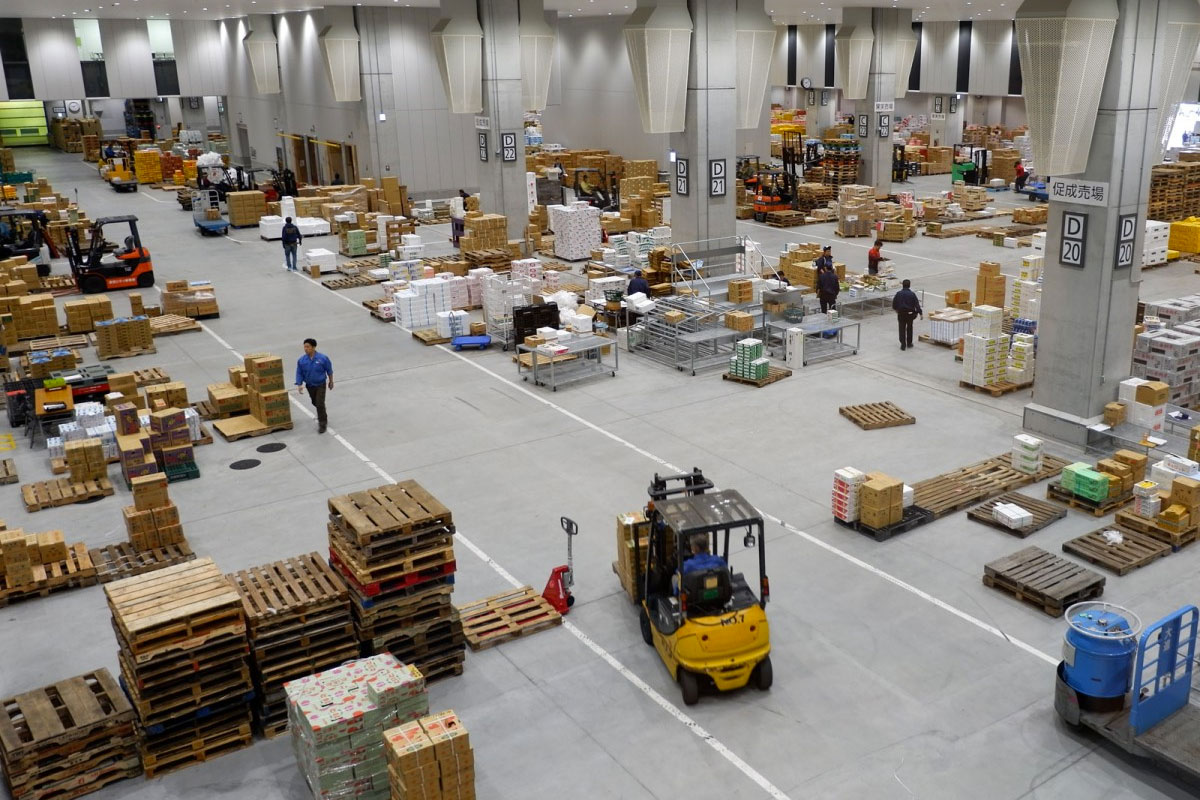 This building holds both the auction hall and the wholesale market for fresh fruit and veggies. You can watch the action from windows on the upper floor, eat at the restaurants near the entrance.