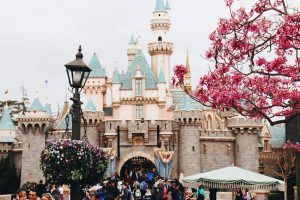 There are six Disney resorts in the world. They are located in California, Florida, Tokyo, Paris, Hong Kong, and Shanghai (China) with a total of twelve parks.

You don’t need to head all the way to America to experience all the family-friendly fun that the world’s most famous theme parks have to offer, there’s a whole stack of them in Asia.

It’s a shorter – and cheaper – flight then heading all the way to L.A or Florida, and you won’t miss out on hanging with Mickey!

But it’s not just Disney, there’s a whole host of characters and cool places to visit and enjoy, so here’s a list of where to find some Asia’s best theme parks

So we thought we’d start with the world’s most famous brand. There are 3 Disney resorts in Asia – Japan, Hong Kong and Shanghai – and they’re all subtly different.

Hong Kong
The park comprises seven lands: Main Street, U.S.A., Tomorrowland, Fantasyland, Adventureland, Toy Story Land, Grizzly Gulch, and Mystic Point. You could definitely see the whole park in one day, but there’s generally ticket deals that have the second day heavily discounted if you want to take your time.
Travelling from Hong Kong is super easy, as there’s a dedicated Disney train that leaves from central station on Hong Kong island and drops you at the door, though you can still stay at the park if you prefer. It’s the parks 15th anniversary in 2020 so you can expect there to be some pretty epic celebrations planned.

Shanghai
Expect all the usual Disney tropes minus Main Street, U.S.A! Either due to political tensions or just because they don’t really like Americans, the Shanghai Disney replaces one of the original Disney attractions with Mickey Avenue. This park is pretty huge and an hour by train from central Shanghai so if you plan on seeing the whole park consider staying at one of the hotels on site. You can also take shuttles direct from the airport. If you plan on catching the train, remember that China blocks Google so you’ll need to use Apple maps or another approved directions app.

Tokyo
Home to two Disney parks – Disneyland and DisneySea – Tokyo has double the reason to visit for families! The two parks are located about an hour outside Tokyo, but with plenty of official – and unofficial – Disney hotels situated out there, and a monorail linking the two parks, it’s still very easy to navigate.

The real highlight is DisneySea. While Disneyland is always excellent, DisneySea is an experience truly unique to Tokyo. You’ll need at least 3 days to properly check everything out, so factor that in before committing to the trip.

Universal currently has two parks open – one in Osaka and another in Singapore – and two more parks currently under construction. Universal Studios Beijing and South Korea are slated to open in 2021.

Osaka
While you can expect all your favourite Universal attractions – Jurassic Park, Sesame Street et al – the main attraction is definitely the Wizarding World of Harry Potter.

If you’ve ever wanted to feel like a wizard, now’s your chance! Ride on a hippogriff roller-coaster, sip on some rich butterbeer at Hog’s Head, pick out your own wand at Ollivander’s or take a picture with the Hogwarts Express.

There’s plenty of trains heading to the park from Osaka central, and even a ferry from the world famous Osaka aquarium.

Singapore
Smaller than Osaka’s version this park is sadly missing the Wizarding World. But there’s still plenty to see here, including Dinosaurs! It’s a little trickier to get to this park as you’ll need to change from the train to a monorail, but there’s plenty of instructions on the website and it’s only a short trip from Central Singapore.

If you like Japanese cartoon characters like Hello Kitty, Gudetama and My Melody, Sanrio Puroland is for you! Located in the Tokyo suburb of Tama, this kawaii theme park offers you the chance to tour Hello Kitty’s house, take photos with life-sized mascots of these cute characters and take home some unique souvenirs. Perfect for the kids or die-hard Sanrio fanatics! The tickets are cheaper too, and while it’s a smaller park, it’s uniquely Japanese.

Located in Nagoya in Japan and Lego-themed Johor Bahru, Malaysia, Legoland will let you race Lego cars at Bricktopia and tour a Lego Factory to see how they produce their iconic bricks. You can also see reconstructions of famous city skylines and other iconic landmarks using Lego bricks at Miniland.