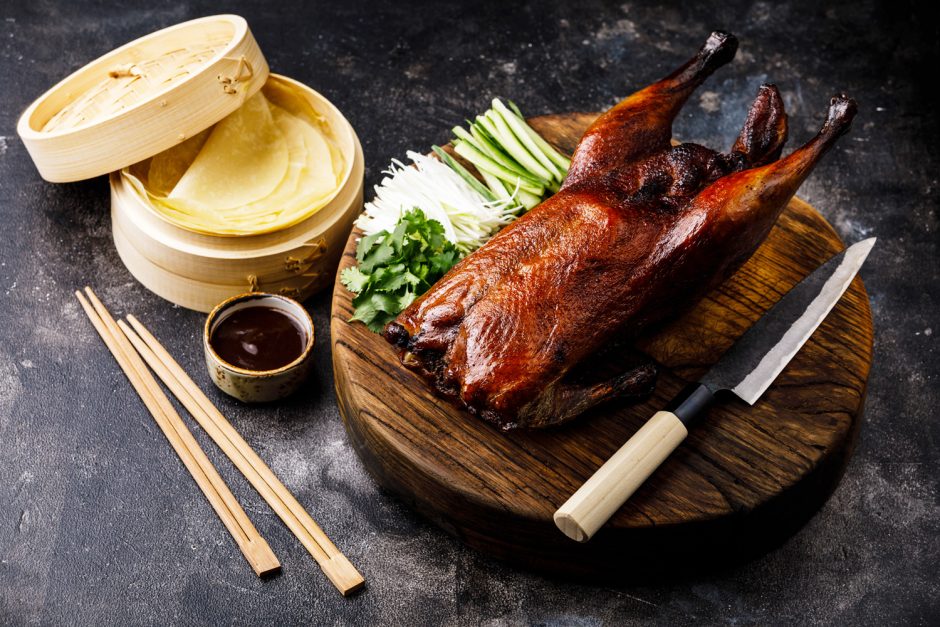 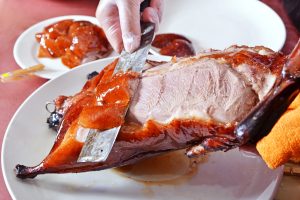 Cutting up the crispy-skinned duck is a skill on its own. It is liken to performance art, as the chef deftly slices the skin into neat pieces which are perfectly sized to each be eaten in one mouthful.

Peking duck maybe China’s most famous culinary export. Either that or fried rice. It’s a close one-two anyway. But I digress.

Peking duck is popular and famous because a) it’s delicious, and b) it’s super inoffensive and non-threatening. It’s a roast bird. We in the west eat them all the time, whether it’s the humble roast chook or a giant turkey at Christmas, the concept is familiar to us.

And while Peking duck isn’t your run-of-the-mill Sunday roast – what with it being air dried and salted and roasted in wood-fire etc. – it is a wonderful gateway food into the joys of Chinese cuisine.

But while the pancakes, hoisin and delicious duck are all enjoyed across the world, what hasn’t been exported – at least not until recently – are the other bits of the duck. China is all about nose-to-tail eating, and the Peking duck is not exempt. When you order duck in China you get more than you do in Australia.

Da Dong – the name translates delightfully as “big Dong” – is the restaurant in Beijing that turned Peking duck into a fine dining delicacy. The restaurant is the brainchild of chef Dong – hence the name – Zhenxiang, who stands 193 centimetres tall and is an international culinary sensation. Dong’s two restaurants in Shanghai were both awarded Michelin stars, and he has projects in New York and London.

Da Dong serves up its duck in various stages. You can expect to start with duck feet in a wasabi mustard dressing. Next up are stewed or stir-fried duck hearts and a Chinese version of duck liver pâté.

Sometimes the head is served for guests to gnaw on in between dishes. And after the carcass has been stripped of as much delectable flesh as the carver can manage, the remainder is broken down out the back in the kitchen. What hits the table next changes depending on the chef and the customer.

Sometimes san choi bao – lettuce cups filled with the remaining duck and veggies – is brought out, other times a simple stir fry. You may even get served a rich duck soup made with bone broth from some of the hundreds of duck skeletons produced by the restaurant.

If you’re still craving duck after your visit to Da Dong, don’t worry, Juwei have you covered. They’re famous for their braised and fried duck necks and have been called China’s answer to KFC. With 7,172 stores throughout the country, there’s one of every corner.

Over duck flesh? Want something a little more hearty and soothing? Well, how about some duck blood soup? It’s hugely popular across China. Legend has it that a pauper in Nanjing happened across an unfortunate duck, and killed it for his meal. He used a bowl to hold the duck’s blood, but in his haste to cook the delicious fowl he accidentally dropped some vermicelli noodles into the blood. Rather than waste the noodles, he cooked them in the blood and – surprisingly – found he’d stumbled across a delicious soup. delicious. The poor man then shared his recipe across the working class of Nanjing, until a rich merchant heard of it and begged the poor man to make it for him and his family. And from there the soup spread across China.

Today duck blood soup is a wonderful example of the merits of nose to tail eating. It uses all the bits we in the west aren’t overly fond of, like the blood, gizzards, intestines and livers. The soup has a dark colour – as you’d imagine – similar to a rich red wine jus. It’s rich and meaty and delicious and is supposed to cure all sorts of ailments.

So if you’re feeling adventurous next time you head out for some duck, ask your waiter if you can have the complete experience!