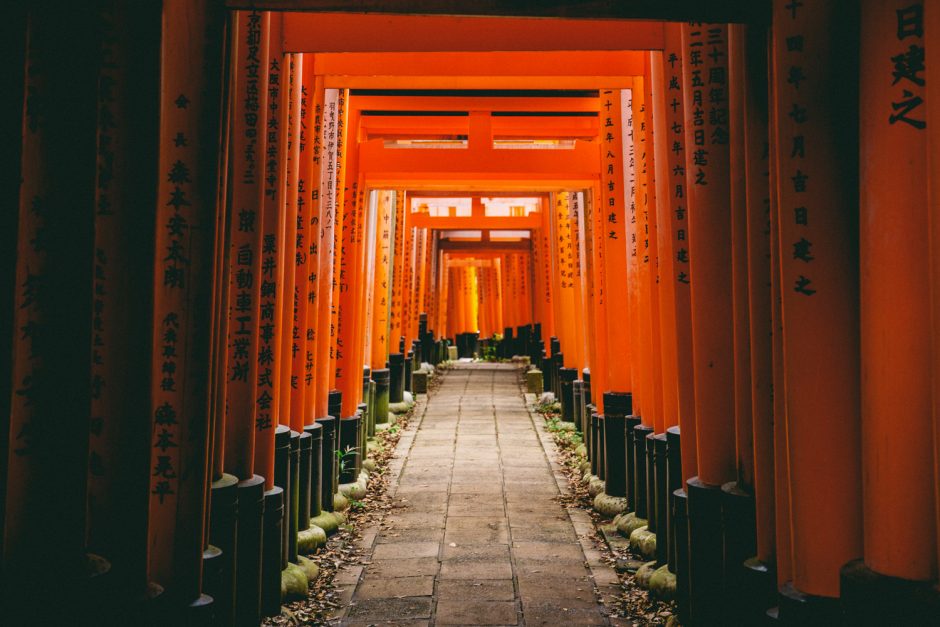 One of Kyoto’s oldest and most revered Shinto shrines, Fushimi Inari is the head shrine of Inari, located in Fushimi-ku, Kyoto, Japan. Founded in 711 AD during the Heian Dynasty, this esteemed shrine serves as the headquarters for all the 40,000 shrines across Japan dedicated to Inari—the Shinto goddess of rice.

Originally dedicated to the gods of rice and sake, this magical shrine is, quite simply, one of the most impressive and memorable sights in all of Kyoto. The shrine is guarded by a messenger—the fox (Kitsune), considered a sacred being in Japanese mythology, capable of changing shape and vanishing in an instant. These holy beings appear throughout the shrine and always in pairs—one fox with a sacred jewel representing the spirit of the gods in its mouth; the other with a cylindrical object, which represents the key to the rice storehouse.

As the influence of agriculture diminished, Inari, once the goddess of rice, emerged as the goddess of success and prosperity in business. This results in the Fushimi Inari Shrine drawing thousands of businessmen and tradespeople seeking blessings for their enterprises.

With seemingly infinite walkways bordered by 10,000 vermilion torii (shrine gates) spread across a thick-wooded mountain, this vast shrine complex is a world unto its own. Each tori bears the name of its donor. While some are ancient and in need of repair, others are more recent, attesting to the fact that this is a religion very much alive today.

It is said that you haven’t properly visited Fushimi Inari unless you take the two hour trek up and around the mystic mountain. So pack your bags and take a beautiful trek up to enjoy this must-visit in Japan.