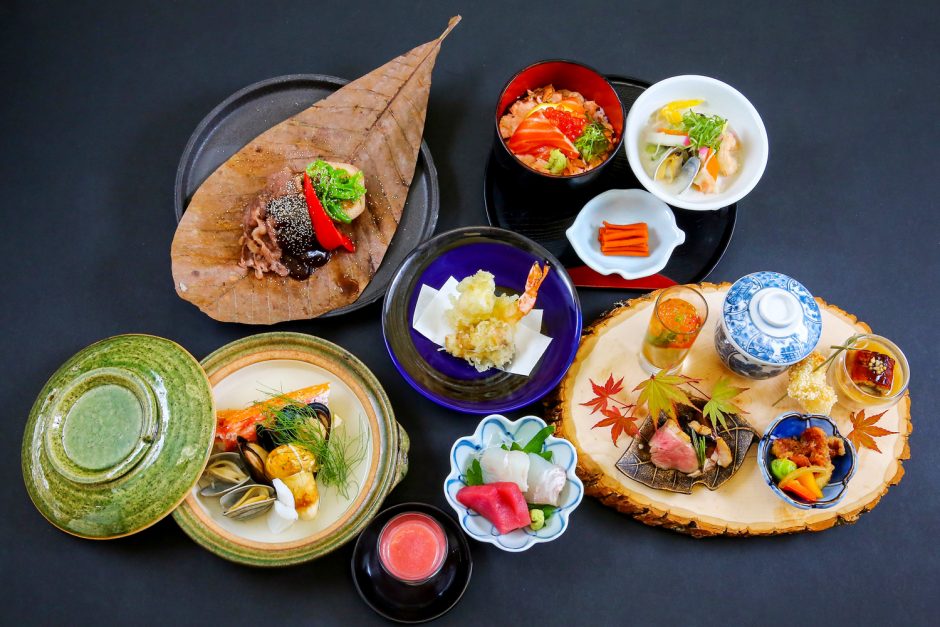 Japanese food is loved around the world and is a staple part of many people’s meal plans each week – just think sushi. But despite the widespread of its cuisine, Japan’s fine dining traditions are less well known and less often eaten.

The kanji characters 懐石 used to write kaiseki literally translate to “bosom-pocket stone”. These kanji are thought to have been used by Sen no Rikyū to describe the basic meal served during a Japanese tea ceremony. The characters refer to the practice of Zen monks placing warm stones into the front folds of their robes to ward off hunger.

Modern kaiseki draws on a number of traditional Japanese haute cuisines but values 4 above all others: imperial court cuisine, Buddhist temple cuisine, samurai cuisine from the old warrior households and tea ceremony cuisine. All of these individual cuisines are still in existence in some form today, but are all now part of modern kaiseki banquets. Different chefs weight the importance of each differently – court and samurai cuisine are more ornate, while temple and tea ceremony cuisine is more restrained – meaning no two kaiseki are ever the same.

The Japanese principle of shun – taking ingredients at the peak of their freshness – is the defining idea behind modern kaiseki. Dishes are presented simply to ensure that the true flavour of each ingredient is championed and it’s natural beauty demonstrated during the presentation.

A kaiseki chef will choose a menu to highlight a specific seasonal theme. So during spring, the cherry blossom may feature heavily, while eggplants may be used in summer. Like the Japanese tea ceremony, kaiseki is about the formal rituals used to present the food as much as it is about the taste. The idea is to engage all your senses during the meal.

Kaiseki typically begins – logically – appetizers followed by sashimi, cooked dishes, a rice course, and believe it or not, dessert. Some chefs will provide their diners with palate cleansers in between each course. Here are some typical dishes you might get at a kaiseki.

Typically an appetizer similar to an amuse-bouche. A bite of horsehair crab and sea urchin tossed in a vinaigrette of Tosa vinegar from the Shikoku region, complemented by stock created from skipjack tuna and oranges is one tasty example.

Suimono is a refreshing type of clear soup often used to cleanse the palate. served in a delicate, lidded lacquered bowl between courses.

The hassun sets the seasonal theme of the entire banquet. This course will often be sushi accompanied by several smaller dishes.

A plate of sashimi showcasing seafood local to the area and as fresh as you can possibly imagine.

The takiawase is all about the vegetables. Despite being served with fish, meat, or tofu, everything is prepared separately before being plated together.

Futamono – Meaning “lidded dish’ – or owanmono (meaning “Japanese bowl” – is literally a dish served in a small bowl or dish with a lid, most typically a soup.

The yakimono is another fish course, but this time cooked. Yakimono is used to refer to earthenware, so often clay or ceramic dishes are used in the serving for cooking of the fish.

Mushimono is usually a tasty steamed dish, often a custard or vegetable.

Shiizakana’s means “strong snack”, and is much like “sake no sakana” – the ‘snacks of sake’. Typically small dishes which are usually quite salty in flavour. These characteristics both balance out the milder dishes of kaiseki, and encourage the drinking of more sake.

The su-zakana, sunomono, and nakachoco courses all showcase small, acidic dishes to clean the palate.

The gohan course – sorry Dragon ball fans – is a rice dish like sea bream and rice cooked in a clay pot, while tome-wan is another soup and ko no mo introduces seasonal pickled vegetables to the party.

Kaiseki is one of the most refined ways to eat Japanese and as such has the strictest etiquette. While foreigners are not expected to know every specific rule, it’s important to observe a few basic formalities.

Before the meal is sure to say “itadakimasu” to show deference to the chef, the restaurant staff and the spectacular food. The towel at your setting – called an oshibori – is used exclusively for wiping your hands.

White people take notice! Chopsticks should not be used to poke, pick up, or cut food into smaller bites. When not in use, chopsticks should be placed back on the hashi-oki, or chopstick rest, not across the top of a bowl or sticking in a dish.

Having the Last Word

When eating soup, pick up the bowl in both hands and drink directly from it. At the end of the meal, remember to thank the chef and restaurant staff with the common phrase, “Gochisou-sama deshita,” which literally means, “It was a feast!”