Every year, on the 15th day of the seventh month in the Lunar Calendar, the gates of the underworld open, and the ghosts are free to roam the living realm. A night to appease the wandering spirits, so they won’t disturb the living. So goes the myth of the Hungry Ghost Festival.

Although Hungry Ghost is commonly considered a Chinese Festival, it didn’t come from China. The festival’s origin has been traced to ancient India, derived from the Yulanpen Sutra of the Mahayana scripture. It tells the tale of a Buddha disciple named Maudgalyayana, whose mother had been cast into the hungry ghost realm, reserved for those who were forgotten due to their misdeeds in life. Maudgalyayana, upon learning his mother’s fate through meditation, went and fed her; but he could not redeem her, and the food just turned to burnt coal in her hands. Buddha then told Maudgalyayana: to aid one, one must aid all, and the way to do so is by offering alms to the monasteries at the end of the monsoon season; whereupon the goodwill and blessing will be transmuted into sustenance for ghosts like his mother.

Buddhism eventually spread to China, and the same tale is told in the Dunhuang manuscript from the early 9th Century CE; titled ‘Mulian Rescues His Mother’. Over time, with the rise of Taoism and Confucianism incorporated into Buddhist belief, the tale expanded to include the opening of hell’s gates, and while some ghosts are believed to be malevolent and sought revenge upon those who had wronged them, others were thought to be simply neglected, passed in unlucky circumstances, or had no one to attend them during other ancestral worship festivals throughout the year.

Thus, the Hungry Ghost Festival as we know it today was established. On this day, families cook vegetarian food and arrange seats for the deceased during meals. Fruits and snacks are offered on the family altar. In the evening, incense and joss paper are burned in front of homes and at street corners. People pray and throw rice to feed the ghosts who had no families. The month is considered inauspicious, unsuitable for life events such as weddings. Other taboos include to avoid speaking loudly and going out at night; never walk on the ashes from the evening ritual, and don’t sing songs about death, play spooky games, or tell ghost stories, as it may attract ‘unwanted attention’.

Meanwhile, in Buddhist temples, altars to the nameless dead are set up, and monks perform rituals to ease their suffering. A large dinner feast is held for them, with ritual food contributed by the community. Lotus-shaped lanterns are lit and set sail in the rivers out to the sea, to help guide the lost souls and forgotten ancestors to Nirvana; in hopes to set them free from the underworld. 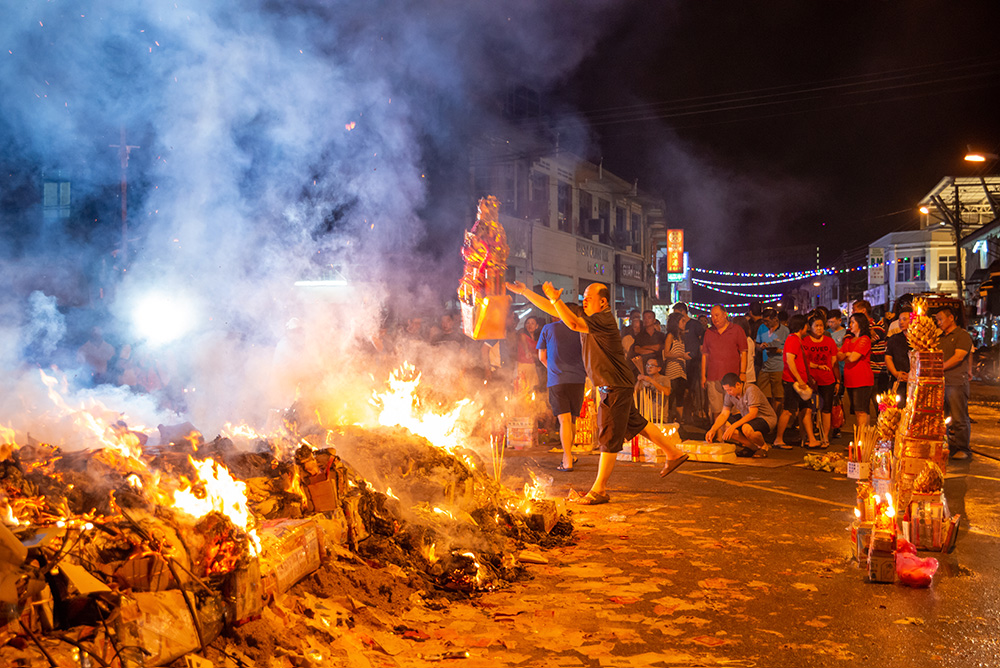 For some Chinese communities in Taiwan, Malaysia and Singapore, these rituals are performed for the whole of the seventh Lunar month, and culminates to a communal street dinner event called ‘Getai’, as in ‘Song Stage’, where mini-concerts, plays and traditional shows are performed to live audiences, with the front row seats reserved for the ghosts. In China, however, these performances are more often traditional opera, with special play acts and rituals for the deceased.

Other Asian cultures observe the festival too.

In Bali, it is called Galungan, when spirits of cremated relatives return to visit their families. Prayers and rituals are performed. Offerings hung on bamboo poles are installed along the roads.

For the Vietnamese, it is known as Têt Trung Nguyên, a time to pardon the condemned souls released from the underworld. The ‘homeless’ are similarly ‘fed’ with roadside food offerings. Caged birds and fishes are freed as a symbolic ritual. Interestingly, the festival also coincides with Vu Lan, the Vietnamese Mother’s Day. Those with living mums wear a red rose and give thanks at the communal ritual service. Those without may wear a white rose and attend prayers.

For the Japanese, it is Bon; evolved over time into a festival of family reunions to visit ancestral graves. In the night, Bon Odori is held—a traditional dance carnival with performances, prayers and even street food, to honour their ancestors.

In conclusion, the Hungry Ghost Festival is about paying respects to deceased relatives and showing kindness to lost souls. A reminder that we are all mortal beings who share the solace for those who have left us, and to cherish the ones we love.