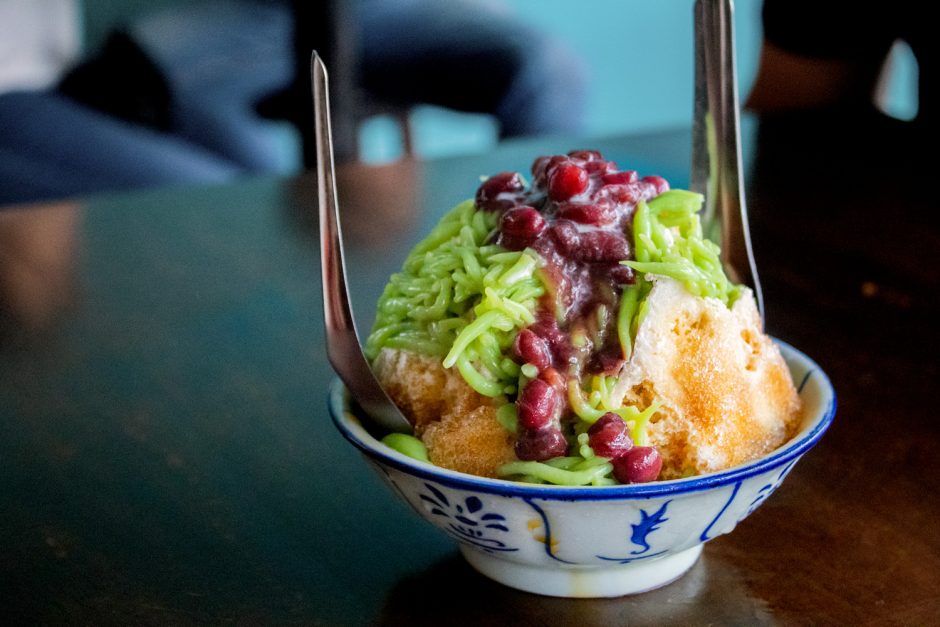 Trent from Asian Inspirations is a hungry man. He’s also a fan of delicious food. So, when it came time to journey to culinary pastures new, he decided that the cultural melting pot of Malaysia was the place to go.

Malaysia is a fascinating place. The culinary scene has so many wonderful influences to draw from, and the result is a unique blend of deliciousness peculiar to the peninsula. Being a largely Islamic nation, Halal food is plentiful. Chinese immigrants who settled centuries ago have blended their flavour palettes with the locals resulting in the amazing hybrid of Peranakan food culminating in the the pinnacle of noodle soups—laksa.

There’s amazing street food, seafood and even some of the world’s best stinky fruit—durian. Anyway, you can see the appeal.

Trent started his journey in the ritzy neighbourhood of Taman Tun Dr Ismail in the capital Kuala Lumpur. The first eatery off the rank was a humble kopitiam named Restoran Yong Len. A kopitiam is a style of coffee shop mostly found in Malaysia, Brunei, Singapore and Southern Thailand. The word “kopi” is a Malay term for “coffee”, and “tiam” is the Hokkien/Hakka term for “shop”—so yeah, it’s a coffee shop. This kopitiam is famous for 2 classics of Peranakan cuisine—har mee and char kway teow. Har mee is a delicious dish of egg noodles served in richly flavoured dark soup stock with prawns, pork slices, fish cake slices and topped with bean sprouts and fried spring onion. The stock is made using dried shrimp, prawn heads, white pepper, garlic and other delicious spices.

Char kway teow—literally stir-fried rice cake strips—might be the most popular noodle dish in Malaysia. The name is derived from the Hokkien term for “fried” (“char”), while “kway teow” refers to the flat rice noodles used. It’s stir-fried over very high heat with dark soy sauce, chilli, prawns, deshelled cockles, bean sprouts, Chinese chives and egg. Both are delicious and needless to say Trent was a very happy and full man afterwards. “Honestly not sure why I ordered two dishes full of noodles and meat to be honest. That might have been a mistake. But a delicious one.” Ahem.

After a day of sightseeing and touring the Malaysian capital, it was time for a special treat—the best hokkien mee in all of Malaysia! Probably. I mean, these things are very subjective.

Restoran Ahwa in Petaling Jaya was the destination, a restaurant famous for cooking its hokkien mee over charcoal. It’s a pretty basic looking eatery, but the food is anything but. Hokkien mee has its origins in the cuisine of China’s Fujian province and most commonly is made from egg noodles and rice noodles stir-fried with egg, slices of pork, prawns and squid, and is served and garnished with vegetables, small pieces of lard, sambal and lime. You’ll usually find dark soy sauce added in Malaysia, which can lend the dish a chocolatey brown colour, but adds a rich layer of salt and umami. The charcoal used at Ahwa adds another layer of smokey goodness to everything as well. “I’m more of a char kway teow fan, but this was the best hokkien mee I’ve ever had. The charcoal just gives it something extra. 10/10 would hokkien mee again.”

Sadly for Trent, but happily for us, they did continue on. Some cendol form Kwong Wah was cued up to finish off the night. Cendol is an iced sweet dessert made with droplets of green rice flour jelly, coconut milk and palm sugar syrup. This ancient sugary drink was first mentioned in dispatches as early as the 12th Century A.D. After a quick sip and a wander, it was finally time for Trent to rest his bulging stomach.

After exhausting his sightseeing options the day before, Trent’s diary was empty—and so was his stomach. But after the punishment his digestive tract had already taken, he was a little trepidatious. “Man the Malaysians can eat! It must be, because there’s nothing else to do. Let’s hope I can keep up.”

To ease himself into the day, Trent lined up a dim sum brunch at Restoran Eden Dim Sum City in Bandar Sri Menjalara. All the yum cha staples—like har gow, siu mai and the legendary chicken feet—were available and were devoured as quickly as they arrived on the table.

Next up was Haianese chicken rice—“Because I haven’t had enough different combinations of meat and carbs yet”—an incredibly popular dish in Malaysia brought over by Chinese immigrants from Hainan. Both Singapore and Malaysia lay claim to inventing the Peranakan version, and it’s a controversial point even today. Hainanese chicken rice is a dish of poached chicken and seasoned rice, served with chilli sauce and usually comes with cucumber garnishes. Known as nasi ayam—literally “chicken rice”—locally, Malaysian chicken shops sell more than just the poached version, with barbecue chicken, duck and pork also on the menu. Fook Loong Chicken Rice in Taman Bukit Maluri hosted Trent and his slowly growing waist line, and they delivered. “It’s such a simple meal, but it’s so damn delicious! I’d have gone back for seconds, but I’m worred about being hospitalised. The lady over there asked me if I was expecting.”

After Trent had spent a precious few hours in a food related coma back in the hotel, it was time for the piece de resistance—Laksa!

One of the world’s great broth-based dishes, laksa is a specialty throughout Malaysia and Singapore and a must eat if you’re visiting. Trent was positively bursting with enthusiasm—“I can’t believe you’re making me go out and eat again”. Well, maybe just bursting.

The final eat house—and possibly Trent’s final resting place—was Baba Low’s in Bangsar, famous for serving up traditional Nyonya food. Nyonya is another term for Peranakan cuisine, but refers to the women who were expected to cook it—Nyonyas.

Baba Low’s is one of a chain of restaurants originating around the Malacca Strait in Southern Malaysia, and it’s famous for its laksa, a reputation Trent believed is well earned. “Bloody delicious. I’m going to go throw up now so I can fit more in.” If that isn’t a ringing endorsement, I don’t know what is!

*No Trents were harmed in the making of this story.