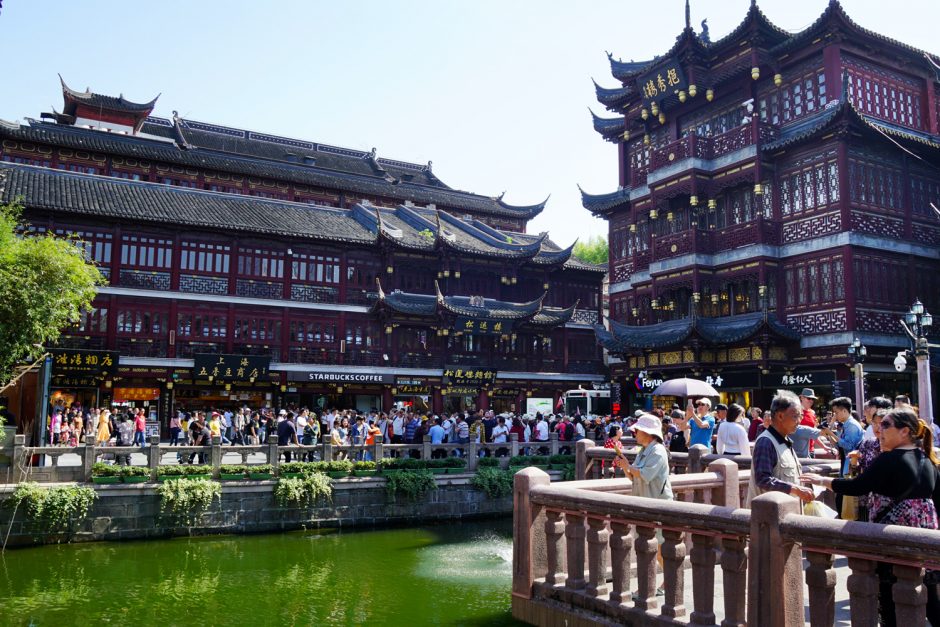 Everyone should visit Shanghai. Like all great cities, it seamlessly blends the ultra-modern with the classical architecture and ancient culture it was founded on.

Don’t believe me? Well here are 8 places you have to visit, or at least 8 places that will make you want to visit this glorious city in China.

The Bund—also known as Waitan—is a spectacular piece of Shanghai’s waterfront packed with some truly spectacular buildings.

The word “bund” means “embankment”, and comes from the Persian word “band”. The dozens of historical buildings used to house banks, trading houses, consulates and clubs for the expat moneyed and elite staying in Shanghai. Originally part of the concession granted to the British in the Treaty of Nanking, it was combined with the American concession in the late 19th Century, but housed buildings from all major foreign powers in Shanghai.

The Bund hugs the Huangpu River for about 1.6km, and is best seen at a leisurely stroll. There are plenty of bars and restaurants if you need refuelling, and you won’t get a better feel for old Shanghai then from down by the riverside.

Another one for fans of walking, Tianzifang is a maze of alleyways full of craft stores, cafes, art studios and trendy bars.

Formerly part of the French concession—noticing a pattern here?—it’s full of preserved shikumen architecture. Shikumen is a style of architecture unique to Shanghai and popularised in the 1860s. It fuses traditional Chinese design with Western influences. At its peak, there were some 9,000 shikumen style buildings across Shanghai, but now most of what’s left is situated around Tianzifang.

Tianzifang dates back to 1933 and is now a major tourist attraction with over 200 local businesses for visitors to explore.

Despite—or maybe because of—its eclectic look and mouthful of a name, the Oriental Pearl Tower is the most recognisable landmark in Shanghai.

Sitting opposite the Bund, this 468m tall TV tower was officially the tallest building in China from 1994 – 2007. While it has since been surpassed by the Shanghai World Financial Center, it still boasts the best view of Shanghai going around.

The tower features 11 spheres of various sizes, with the two largest spheres measuring 50m in diameter. The three enormous columns that support the entire structure are built deep into the earth to anchor the giant structure.

If you’re just here to catch the view, the tower has fifteen observatory levels with the highest—known as the Space Module—sitting some 351m above sea leavel. In classic sky needle fashion, there’s a revolving restaurant just for good measure and a hotel in case the desire to stay there grabs you.

With a name like ‘7 treasures town’, you know Qibao’s going to be beautiful. Situated about 18km outside of Shanghai, this little delight is well worth dealing with some of Shanghai’s traffic.

With a history spanning some 1,000 years and dating back to the Northern Song Dynasty, Qibao is another reminder of just how ancient a country China is.

The name is rumoured—loosely—to be derived from 7 legendary treasures that are meant to have been housed in Qibao—an iron Buddha, a bronze bell, a Gold Script Lotus Sutra written by an imperial concubine, a thousand-year-old Chinese catalpa tree, a jade axe, a gold cockerel and a pair of jade chopsticks.

Despite the modern day absence of most of these treasures, Qibao is still well worth a visit. The temple itself dates back to 960 A.D. and has been extensively renovated. There’s the world famous cricket fighting rings—yes, it’s a thing—where locals and tourists alike can place bets and cheer on their favourite grasshopper. There’s amazing food, craft shops and narrow alleys to lose yourself in.

You can’t miss it, due to the giant red pavilion—called the China Pavilion—finished in 2010. Originally opened in a former restaurant in 1956, the museum was moved to it’s current location in 1986 and has been continually improved. It houses some 14,000 various works as well as a constant rotation of special exhibitions and touring collections. Well worth a wander through on a lazy afternoon.

A beautiful garden nestled in the heart of Shanghai originally built by former governor Pan Yunduan in 1577, the cost of the gardens upkeep and expansion eventually bankrupted his family.

It has been maintained and closed and opened by various owners and groups over the centuries, but has been returned to its former glory in recent years and is a truly beautiful place and a welcome respite from the concrete mass of modern Shanghai. It covers some 2 hectares and contains extensive gardens filled with sculptures and carvings, a tea house, astonishing halls with hanging rock displays and a 5 tonne boulder called the Exquisite Jade Rock.

Another ancient town on the outskirts of Shanghai, Zhujiajiao is a water town with a history dating back some 1,700 years!

As the term ‘water town’ suggests, Zhujiajiao is built on a series of canals. It’s like a tiny, Chinese Venice, replete with gondalas which will take you for a paddle for a small fee.

There are ancient bridges and streets to wander down, the beautiful Kezhi garden, and even an ancient post office for you to check out.

Expect all the usual Disney tropes minus Main Street, U.S.A! Either due to political tensions or just because they don’t really like Americans, Shanghai Disney replaces one of the original Disney attractions with Mickey Avenue. This park is pretty huge and an hour by train from central Shanghai. So, if you plan on seeing the whole park, consider staying at one of the hotels on site. You can also take shuttles direct from the airport. Don’t forget to say “Hi” to Mickey for me!