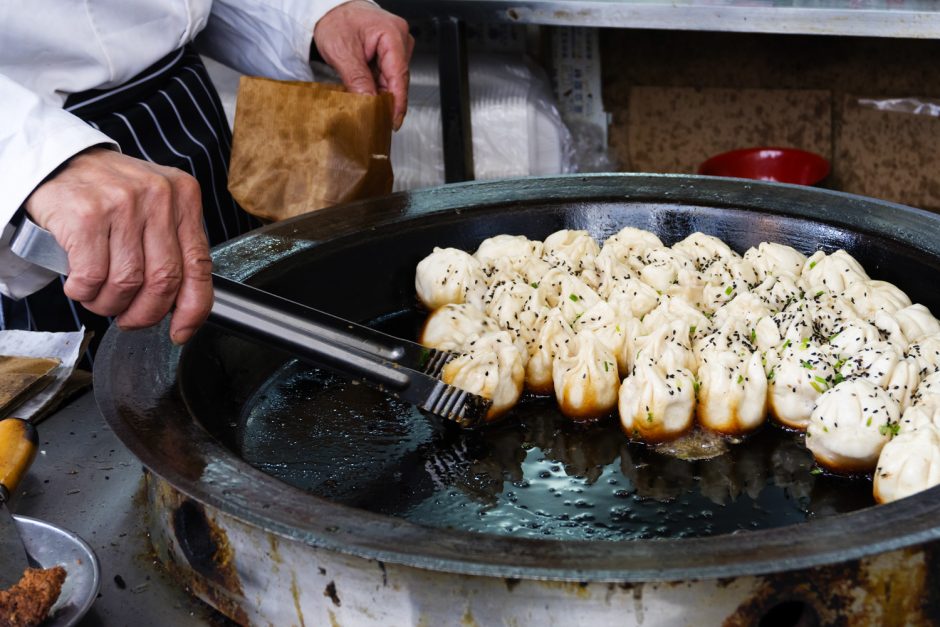 Chinese culinary culture is famous for its hawker and street food, and Shanghai is no exception. The world’s most populous metropolis has a number of hawker hubs that are a must visit for foody tourists, but you also need to know what to eat.

We’ve found 10 of our favourite dishes found on the streets in Shanghai, and you could do a lot worse than start here.

Hairy crabs are a must try—they’re much more delicious than they sound—but sadly aren’t available all year round. However, the little pies that take their name from the outer carapace of the crustacean—xi ke huang—are. The pies are baked in a clay oven until golden brown and come in both savoury and sweet varieties. When you see the rows of crispy golden ovals lying next to each other, the name starts to make for sense.

Pork buns are irresistible at the best of times, but when they’re pan-fried golden brown and served piping hot, then it’s physically impossible not to buy too many and eat them all. Totally worth the inevitable blisters on your tongue from the hot soup inside.

A little different from the fried chicken you’re used to, but just as delicious. Think chicken wok-fried with chopped dried chilies, spring onions, ginger and garlic and then sprinkled with sesame and five-spice powder. It’s even better than it sounds.

Super tasty and super cheap. You can’t get much more Shanghai than these signature soup dumplings.

They don’t look great—kind of lick weird sausages—but they’re full of tender, lean meat. Pair with beer and a park bench with a view and you’ve got the ideal snack.

Sometimes, simple is best. This salted glutinous rice cake doesn’t have fancy stuffing or pretty garnish, but one single sheet will instantly hit the spot.

Or pan fried dumplings as they’re known here. Look, you’ve probably had them dozens of times in your local China town on a boozy night out. But you haven’t had them in Shanghai. So do it.

Basically a big bao, you can pick your meat—can’t go past the barbecue pork—some veggies and a heap of chilli sauce, all served in a big, floury steamed bun. Delicious.

Got to have some sweets! Made from glutinous rice flour and coated with white sugar, these doughnuts are deliciously greasy and probably bad for you and your arteries. But who cares when they taste this good.