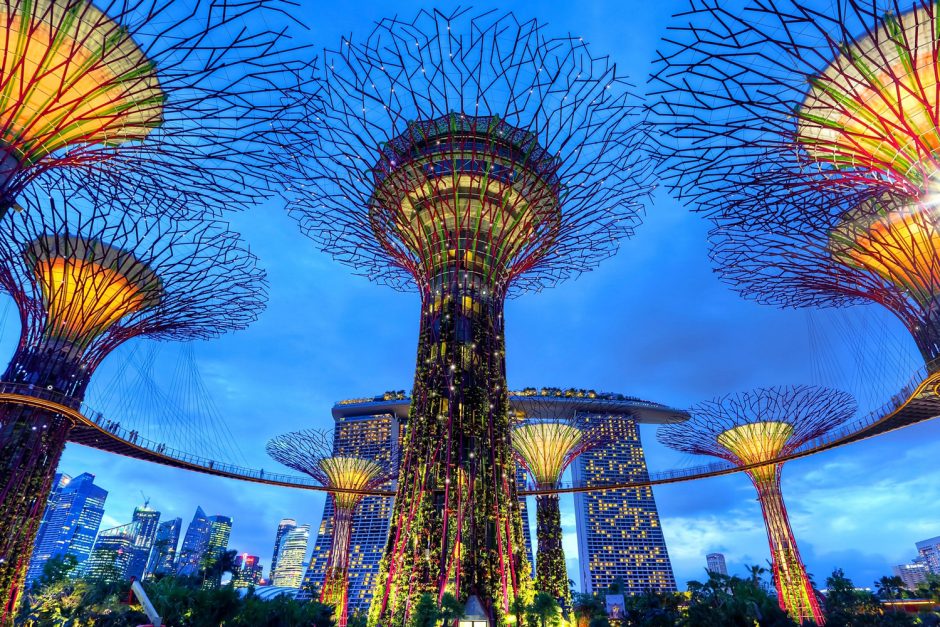 Singapore is one of the great cities of the world and a fantastic holiday destination. It’s a cultural melting pot and truly an example of East meeting West. There’s so much to do, which is fantastic and a little overwhelming when you’re a first-time visitor, whether you’re spending a week or just making a quick stopover.

So, to make it easier to hit all the key spots, we’ve put together a list of 10 of our favourite must-visit spots across Singapore, so take a look before you get on the plane.

The Merlion is the official symbol of Singapore. Its name combines “mer”, meaning “the sea”, and “lion”, meaning, err, “lion”. The fish body represents Singapore’s origin as a fishing village—it was originally called Temasek, which means “sea town” in Javanese—and the lion head represents Singapore’s original name Singapura, meaning “lion city”. If you’ve seen any images of Singapore you’ve almost definitely seen a Merlion, and the best place to see one is at Merlion Park.

The original statue of the Merlion used to stand at the mouth of the Singapore River. The statue was made from November 1971 to August 1972 by the late Singaporean sculptor, Mr. Lim Nang Seng. It measures 8.6 metres high and weighs 70 tonnes. It was moved to a specially built pier in 2002 as it was thought to be a much more impressive position, and boy were they right! Make sure you get down to the riverside and check it out.

Gardens by the Bay

Gardens by the Bay is a gorgeous nature park spanning some 101 hectares in central Singapore. The park consists of three waterfront gardens: Bay South Garden (in Marina South), Bay East Garden (in Marina East) and Bay Central Garden (in Downtown Core and Kallang). It’s a truly spectacular place for a stroll and it’s more than worth visiting each individual garden, as they all have specific landscaping design, character and themes.

If you’ve only got limited time however, check out the Bay South Garden. Not only is it the biggest of the 3, it’s home to the Flower Dome (the world’s biggest green house), the super instaworthy Cloud Forest, and the famous Supertree Grove.

The Singapore Zoo is a pretty spectacular place. Its open plan design and use of natural barriers, rather than cages, provides a fantastic and animal-friendly way for visitors to view some of the world’s most amazing fauna.

The Night Safari is the world’s first nocturnal zoo and currently houses over 900 animals, of which 41% are threatened species. It’s hugely popular, with about 1.3 million visitors per year, so make sure you book tickets in advance. You’ll get to visit an entire open-air zoo set in a humid tropical forest that is only open at night. It is divided into seven geographical zones, which can be explored either on foot via four walking trails, or by tram.

And don’t forget the River Safari! A giant river-based aquarium spanning some 12 hectares. The park consists of a total of 10 different ecosystems around the world, including the River Nile, Yangtze River, Mississippi, Amazon as well as the Tundra. It features 5,000 animals, including giant catfish, pandas, salamanders and even jaguars.

Maybe the most spectacular hotel in the world, the Marina Bay Sands has become a true Singaporean icon. If you can’t afford to get a room there, then a cocktail by the horizon pool is a must, as you won’t get a more astounding view than from the pool deck. Maybe just hit the gym for a few weeks before you head up there. Or keep your shirt on. I’m just doing you a favour here.

One of the great shopping streets of the world, Orchard Road is a retail mecca and should be strolled by everyone who visits Singapore. Named for the orchards it once led to, the 2.2 km stretch is now home to some of the world’s biggest and best brands and more shopping malls than you can poke a stick at. You’ll also find the Botanic Gardens, the official residences of the Prime Minister and the President, and Emerald Hill, one of the nicest suburbs in Singapore.

Sentosa has a sordid past. The island was once a British military base, and then a Japanese prisoner-of-war camp, before being turned into a tourist paradise in 1972. Now more than 20 million people visit Sentosa every year. You can hang out on the 2 kilometre-long sheltered beach, check out the old British fort, Fort Siloso, play golf on two golf courses, or check out the Universal Studios Singapore theme park and a casino. Universal Studios is the jewel in the Sentosa crown. But you could easily spend two days wandering Sentosa and still not see everything.

After the success of the London Eye, Singapore decided it needed its own giant ferris wheel. Standing 165 metres high, the Flyer was the world’s tallest ferris wheel until 2014, when a bigger one opened in Las Vegas. It’s a relaxing⁠—and air-conditioned⁠—way to take in the Singapore skyline and to enjoy 360 degree views of this great city.

The major attraction is⁠—a little disturbingly⁠—the Ten Courts of Hell, which features gruesome depictions of Hell in Chinese mythology and Buddhism. You’ll also be able find scenes from Journey to the West and statues of the laughing Buddha. It’s a truly unique attraction you’ll struggle to find anywhere else.

Located just near Orchard Road, the 160-year-old garden is one of only 3 gardens⁠—and the only tropical one⁠—to be named a UNESCO World Heritage Site. It was first opened in 1859 and played a significant role in the cultivation of rubber plants in Singapore.

More than 10,000 species of flora is spread over its 82-hectare area, and includes the world’s largest orchid collection in the National Orchid Garden. The Botanic Gardens receive about 4.5 million visitors annually, and you should be one of them.

This one’s more for those of you who are just passing through Changi Airport. Linked to three of its passenger terminals, Jewel is a “nature themed entertainment and retail complex”, the centrepiece of which is the world’s tallest indoor waterfall, named the Rain Vortex.

There’s a plethora of gardens and parks to check out inside the Jewel, and it’s a perfect place to unwind and find yourself again after a long flight. Plus there’s heaps of shops for those in need of retail therapy, plus some pretty good restaurants.